I was working on a project building an event booth, and little bro and co. kindly allowed me to use their workshop. Well hell if we're down there for a few days we should be able to squeeze in a few hours of hunting right?

Of course we made some time, so good friend Mark who was helping me on the project came with, and by 9am we were walking with Baron. Around 10 minutes later Baron's head jerked high and left, and in a second he was over the ridge and scrambling. 20 seconds later came the now familiar bay. He was still moving around, but as we got into position I could see him coming back toward me with a boar in tow. Mark and I were still moving, boar got spooked and turned around heading downhill through light cover and trees with Baron on her tail.

Mark and I scrambled after them as we heard the bay start up again and as we got halfway there, I heard and then saw 2 more boar moving to our right. One stopped at around 40 meters, and I almost had a shot but shrubbery was obstructing the head and front end. I let them pass since I could still hear Baron on the other boar. Breaking through thicker cover at the bottom of the hill, we ended up at a large grassy opening with a mountain on the other side. On the mountain face around 30 meters above the clearing, a mountain road runs along the face of the mountain. Baron and the boar were moving slowly, bay, charge, dodge, bay, charge, dodge, and I could see dog and boar doing this dance on the road above the clearing.

Got up onto the road behind Baron, and we kept moving forward. Here in Japan we are not allowed to shoot from or over roads, so I had to wait till the boar got off the road. Eventually we got up far enough where the road ends and there is a clearing to the left. All this time Baron kept looking back at me with a bewildered look, but as I kept encouraging him and moving toward the boar, he did his job. At the clearing the boar moved off the gravel and to the left, Baron was holding her nicely as I popped off a round at around 20 meters. Clean head shot through the eyes again, and the boar dropped. 9:30am. 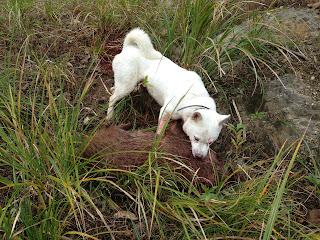 A closer look at the boar showed Baron had taken out its back left tendon, so the boar was unable to run very fast. It's a nifty little trick for a hunting dog to pick up, so hope he learns from this experience.

We bled the boar, and headed with Baron back toward the truck a mile or so away. After getting there, it was clear Baron was not interested in finishing for the day as he didn't even want to eat his breakfast. I let him out of the truck again thinking he'd wander around close by. Well he was off on the hiking trail stretching his legs. I sent Mark in the truck downhill since I know there are some more medium sized boar in this stretch of mountain that like to run, and always use the same path. Baron doubled back on the trail and as we met I guided him toward a few often used boar nests. In 5 minutes he found one, and started baying. I got to where I could see him baying stationary in front of the nest, but for the life of me couldn't pick out the boar. Baron saw me closing, so he moved in to catch, missed, and boar and dog headed downhill.

The boar was feisty, and the bay/charge/dodge was in full play. I yelled to Mark over the transceiver that dog and boar were headed his way. Nearly at the spot I knew they would spill onto the road, I saw the boar below me running through the bamboo with Baron a meter behind. Too fast for a shot. I scrambled after them as I heard Mark telling me over the radio that they'd crossed the road into the stream. As I got to the road, I got a comedic glimpse of my bearded buddy running down the road after them armed with a shovel. He doesn't have a firearm license, and later said he heard them coming down the mountain making a huge ruckus and the only thing in the truck to defend himself with was the USM folding shovel I always have on hand.

Baron caught the boar in the stream, but it was too deep for me to get across, and I had to go around. By the time I got there, they had moved downstream and into a bamboo thicket. I thought we had this one in the bag, so whipped out my phone to take a video. Majorly stupid decision.

Baron and the boar were both completely wiped out and over heating. They looked like fighters in the 12th round moving in slow motion, but they headed into high grass where I couldn't get a shot, and it was very hard to get to them. In the end the boar slipped away, and Baron and I headed to the stream to cool off. It was almost 2 boars in 2 hours, a great effort by Baron, and I won't be pulling that video stunt again. Luckily my new GoPro3 should be arriving soon for some hands off hunting footage.

So, boar number 6 for Baron on 9 outings this season.