February 14th, for Baron and I, was the last day of the 2012 hunting season. As such my brother and I decided to finally get up at the crack of dawn like good hunters should (I guess?). So there we were rolling out of the house just as the eastern sky began to turn pink. We headed to our usual area, and decided to hunt just off the hiking trail, an area we hadn't hunted since the 2nd day of the season.


Surprisingly, the first 2 and a half hours were entirely uneventful. No fresh tracks, no scent. We passed the time chatting to other hunter buddies on FB, and even took a few pictures. 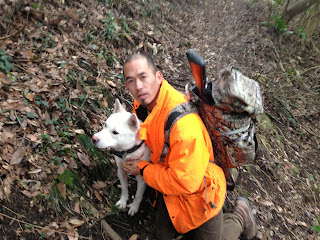 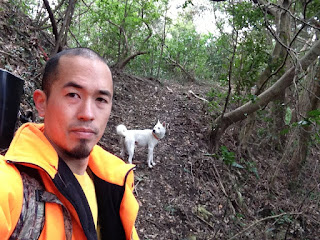 As we got to the back of the trail however, Baron started paying a lot of attention to the wind gusting up from the gully to our left. It wasn't enough for him to head down, but the wind was blowing him some scent. I decided to double back and hunt a finger of the mountain that was opposite the gully. After we trekked into the ridge, Baron went off to the left and began hunting very carefully, up and down the ridges. Something had definitely been in the area during the night, and Baron was running around head down and concentrating. Together we combed the area carefully, but nothing. We ended up back up on the ridge that I had lead us onto, and from there Baron moved forward. I wasn't sure if he was still on track, but he moved down the right side of the ridge this time, and my brother heard it first, the half loud, questioning bark that Baron now uses to wake up sleeping boar.

The bay started immediately, and I rushed to close distance, tossing the GoPro to my brother to take some footage. Baron was charged several times, each time bringing the boar closer to us. I first saw a large boar 20 meters below me after a charge, but just when I thought they were starting to move away from us, Baron moved back in front of me silently, and as he moved in, the boar moved to meet him. At 10 meters I popped off 2 rounds, and the large boar dropped. A second boar I hadn't even seen charged up at Baron, and veered to the right when it saw me. As it stopped I popped off a round, but it had just started moving again, and the shot missed.


The large boar was still moving, but Baron was on it and it wasn't going anywhere. As I got there the boar was taking its last breaths. The first shot had gone through the vitals, the second bounced from the shoulder, up through the spine. It was 9:30am, and while there was some talk of going after the second boar, we were a long way from Kansas. It took most of the rest of the day to get this 70kg female up out of the gully, and through the mountain to civilization. At one point Baron did take off after another boar, a runner, and while I was almost in place for a shot, it slipped past us too far below, and Baron was unable to stop it. 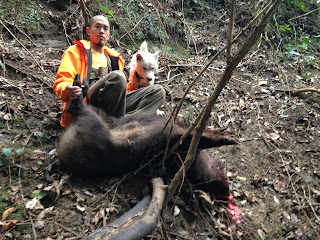 It was a great way to end the season, another large female for the freezer, some more excellent meat. We had 26 exciting days with no major accidents or injuries. I am thankful for that, thankful for a great partnership with a great dog. 13 boar all taken with one hunting dog, Baron.
Posted by Kato at 1:02 AM