Hime is an aka-goma (red sesame) female Shikoku I've owned for a while now, but due to the fact that I was holed up in Tokyo, she was with my good friend Ogawa-san over at Gotenyama Kennel . Now that I'm set up in my new place in the middle of nowhere, I went and picked her up at the end of April. We expected her to come into heat fairly soon, and as soon as I got her home, I realized (or Baron realized) she was already in heat. With no idea how many days in she was, I was at a bit of loss to decide what exactly to do.

Hime's been fairly unlucky when it comes to heats. Last heat, she had a split heat, so Ogawa-san had to take a guess at when to breed her, and I guess we got it wrong. The heat before that, she was bred, but then got lost in the mountains for a month, so that breeding didn't take either.

Now she's in heat, and while I'm figuring out what to do, I notice there's a bit of blood in her stool. Stools are still firm, so I wasn't too worried. Just figured it was the stress of being in heat, the new environment, and the food. Then a couple days later, all hell broke loose. She started hemorrhaging profusely, a very dark nasty smelling amount of blood. I've never seen parvo before, so that was my first guess. Thing was she'd been vaccinated just a few months prior, so while I was pretty certain it wasn't parvo, I had pups at the time and needed to be sure. I took her to the vet, and she wasn't doing well at all. We had her checked for parvo while out in the parking lot, and it came back negative, thank god.

Still, she was no longer mobile, very listless, and not able to keep anything in through either end of her body. We got her on an IV, and I took her home for the night. Bloodwork came back without showing much of anything, other than that she was very sick. The vet diagnosed HGE and told me to bring her back first thing in the morning. Hime's not exactly that fond of strangers, and I figured it would be less stressful if she didn't need to be hospitalized. It's only 10 minutes to the vet from my house anyway. We weren't sure she'd make it through the night.
Well come morning, she was still with us, so I took her to the vet. From there, I decided to leave her at the vet's since I was leaving for Rome the next day. The vet said she didn't think that Hime would pull through, but that she'd do her best. I figure that as dog owners it's our responsibility to do what we can, even if the odds are slim, and Hime was fighting so hard to stay alive.

I kept in contact with my vet throughout my trip, and while the first couple days were touch and go, Hime did pull through, and a bankrupting hospital bill later (lol) she was back home being her usual grouchy self. So note to anyone who notices any blood in their dog's stool, diarrhea, etc get it looked at sooner rather than later, as it could save your dogs life. Hime went from fine to dying within the course of a day.

Here she is taking a nap in the doorway after I brought her home, looking very gaunt. 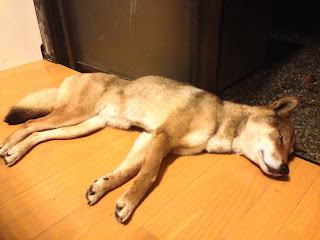 She's put her weight back on, so I'll try and get some beauty shots soon for the blog.