I've decided that this guy will definitely not be staying here. There will be a couple more dogs arriving over the next few weeks, so I'll be full up if I keep him. 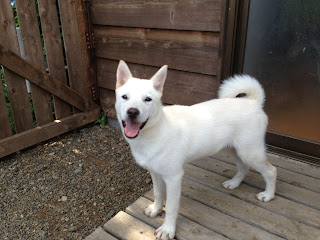 He'll be 4 months old in a few weeks. He came here when he was under 2 months old, and without a home. 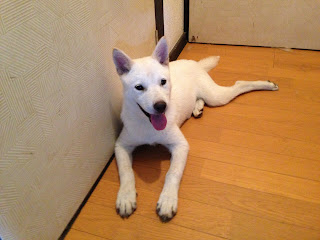 He was very mouthy, showed some separation anxiety, and was very snarky about just about everything. He's gotten much better while here, he doesn't attack everything with his teeth, he's learned that the crate is a good place to sleep, and he's okay with being left at home (sometimes he will still howl a bit). He's learned to be less tenacious when playing with other dogs, but he's still fairly rude. If you want a dog that is a social butterfly and gets along with all dogs, Kachi is not the dog for you. The fact that he's gotten better as he's gotten older shows me that he has the capability to learn, he just needs a lot of direction. 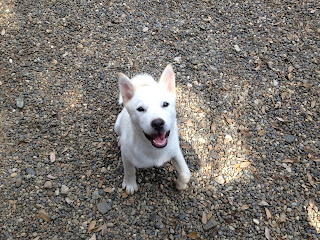 He loves people, has a lot of energy, and loves to play. He's quite a smart, outgoing, little guy.

I think he'd do best in a home where there is usually someone home, or where there are other dogs that he can be with. He will not fit well with dogs who are not tolerant of rude play and behavior.

While I wish I could get back at least some of what I paid for him, I'd be happy just to place him with someone who has the time and energy for him and will give him a good home. Feel free to email me with any questions at kato.the.walrus@gmail.com

Just wanted to add, if anyone's looking for a working Hokkaido, I think this guy has what it takes.