The pups are 40 days old now. I took them to the vet the other day for a physical, and they all came back with a clean bill of health. Hearts, bites, joints, overall health, all looked good. Not that Kenzo will ever be used for breeding, but I had his testicles checked as well, and one is already descended.

In temperament I'm finding 3 very nice pups, with Summer being the more subdued of the three. She is the most wary of the pups when it comes to strange noises etc, but she really loves people she knows and will work to get their attention. Kenzo is a cuddly roly poly, and is a pretty happy go lucky guy. Momo (temporary name since she doesn't have a home yet) is the pup I would pick as a working pup. She's more vocal than the other three, is the most inquisitive, has decent recovery, and is tenacious. I'll probably temperament test the pups for fun next week. 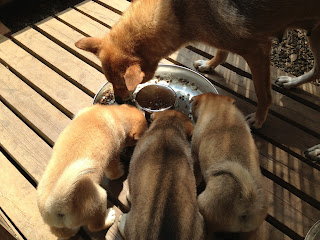 The pups are big. I'm used to seeing pups at around 3kg at closer to 2 months old, but these roly polys are already there. And, Momo is now bigger than Summer. 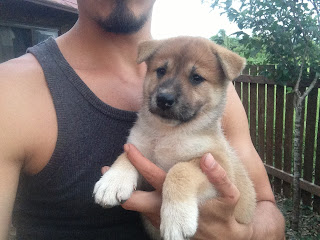 A pic of Momo since she's still looking for a home.