The NIPPO all Kanto regional is tomorrow, with the National coming a week afterward. I'll be showing an adult Shikoku male, so I've been busy getting him comfortable with me. Things were pretty iffy at the beginning, which is to be expected when showing someone else's adult male Nihon Ken. Whether or not we'll do well in the ring is anyone's guess at this point. The regional is our warm up, and it will be raining. In fact it just started pouring a few minutes ago.

I'll head down to Osaka on Friday night for the National, which is the day hunting season opens. I'll probably do a few rounds in the morning, then prep for my trip in the afternoon. I'm trying to get the house in order before the cold hits, so we're working on insulation, the fire place, and the front porch. This house was about to fall down when I moved in here in February. I was practically living outdoors in the middle of winter. 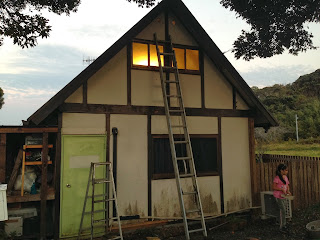 I was at Twin Rink Motegi for the Air Asia Moto GP race 2 weeks ago, running Air Asia's main booth, which was a complete physical wipe out. 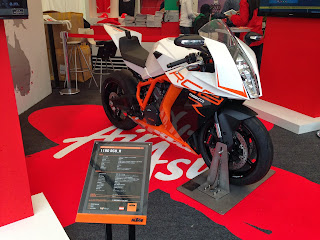 After getting back, I had the week to prepare for a friend's gallery opening which Magical Animal (me) was catering. It went extremely well and was loads of fun. 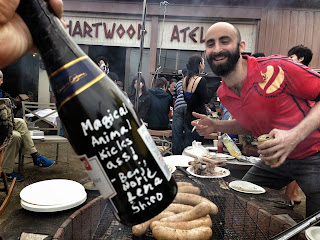 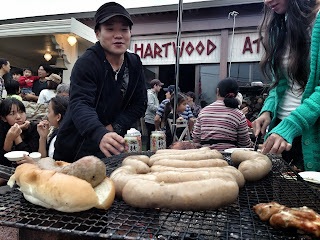 I'm also trying to get ready for the hunting season, so I have taken Baron out a couple of times on short runs. I took him out Friday for an hour, and we took Hime along too. She's glued to me in the mountains. I took them to an area where there isn't much wildlife, just to stretch their legs. They both did very well, so I took them to our hunting area today. I was out there in the mountains for 4 hours, and Baron was a complete beast. He rustled up boar for us 5 times (all different boars and 1 family group), and if we were in season I had at least 3 dead on shots at boar within 5 meters. He was baying, flushing, and catching. This guy does it all.

On the first group of boar, Baron went around to the tip of the ridge we were on, and after a minute or so I thought I heard his 'neya-dome' bay. Once he finds boar bedded down, he moves in carefully, and gives a few soft barks to wake them up, then turns up the volume to hold them there. I tore off to the spot like a wild man, and got just above where Baron had the boar bayed. I had Hime in tow, and the video below is what happened when 6 year old Hime saw her first boar.

It was very short, but she ran down there and bayed like a champ, and tried to catch the boar when it charged. She missed, and after the boar charged again, she came running back up behind me. I was still quite happy with the result. The rest of the day she was not interested in the rest of the boar we ran into, but I think a bit of time in the mountains will give her the experience she needs to find and bay boar.

After a couple more run ins with boar, Baron was exhausted, and so were we. A few hundred meters to the truck, we were walking toward the point of the ridge before it drops to the road. On the right of the ridge, and at the end, are bamboo thickets that I have taken boar in before, so I was ready to run into some more boar, and that's exactly what happened. First Baron dropped to the right, and a minute later we heard the tell tale sounds of a railroad train charging through the thicket, snapping bamboo like twigs. Baron came barreling out, came to get me, and we went back in together. The thicket was too dangerous to be messing around in without a gun, so we moved on. Baron was moving very tentatively, so I figured there was still a boar nearby. He wasn't moving far ahead, but was staying around 5-10meters out, constantly stopping to check the wind.

As he moved to the right again, I kept going forward (thinking we were past the last boar nest), and I walked past a group of ferns about 3 meters on my right. Hime was right behind me, and my hunting buddy was behind her. When Baron came from behind to catch up, he stopped at the ferns, and I heard him give a low growl, and then his half bark. Since we'd just walked past the spot, I thought he found a badger nest or tanuki, so I started videoing and walking the few meters toward him.

To my surprise, out charged a 40kg boar, and Baron immediately grabbed its ear. I threw my iPhone away, and in that split second realized I was trading my 80,000 yen phone for a boar, and jumped forward to grab its back leg. The boar wheeled, Baron lost his grip, and we were all left in its wake. Baron tore off after it, but was so exhausted that I had to get him and carry him back to the car. He's sleeping here at my feet now, a tired but happy Kishu. The gentleman who was out in the mountains with me said that Baron is the best boar dog he has ever seen. I know he isn't perfect, but I agree that he's a downright amazing dog.
Posted by Kato at 10:34 PM