Breeding Shikoku (and I guess breeding in general)

It's a pain. Really.
I walk/clean kennels/play/feed for 2 hours first thing in the morning, and 2 hours at night. 'First thing in the morning' can mean at 8or9 when I usually get up, or dawn. It depends on the dogs. 'At night' means that sometimes after a long day of work, I get home at 9-10pm, and the walking starts from there. In all things the dogs come first.
Good kibble costs a lot in Japan. I don't even want to add up how much I'm spending on dog food. I did add up all the costs involved with caring for my dogs for last year, versus the amount I made selling a litter of pups, and wonder of wonders, I lost money. Of course I told myself that I probably wouldn't have any more emergency dog hospitalizations, so I'd do better this year, but no, I've had a few of those this year as well, and lost one pup (Riri).

Having an average of 15 dogs around for the last several months I've realized that there's almost always going to be something going on with one of the dogs. I've got 4 Shikoku adults (3 females and 1 male), 1 Kishu adult, 2 adolescent Akita, plus 2 litters of Shikoku, and 1 Hokkaido pup that will be here till August. 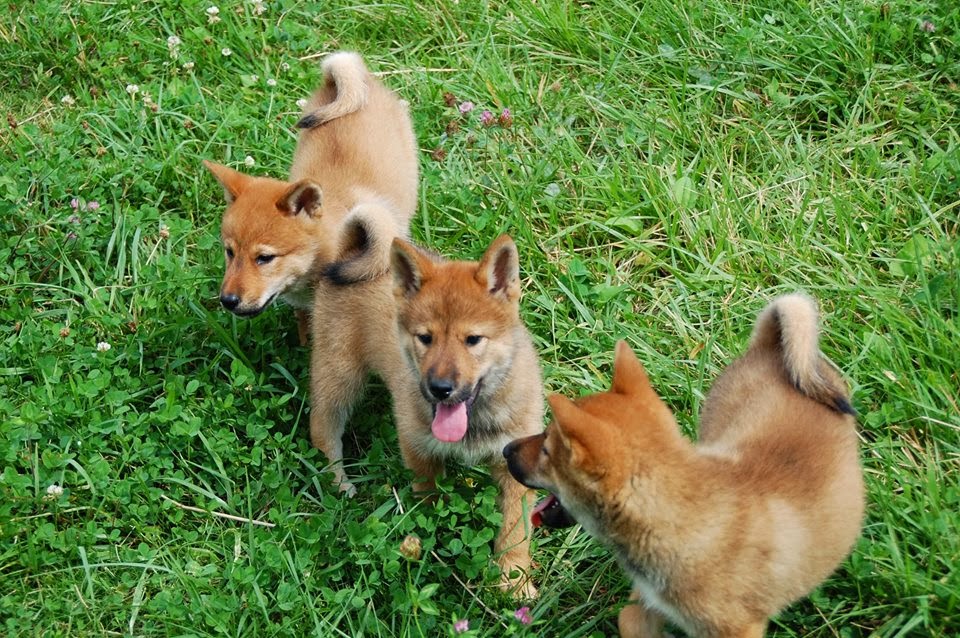 None of the Shikoku females can be together, so that's some management issues right there, and neither can either of my males. Even trying to mix puppies from different litters together is troublesome, as is mixing in the Hokkaido, or even the Akitaa (they're just really big and clueless, but hey, life is good).

The Nihon Ken seem to have fairly sensitive stomachs. That's just an observation since I haven't owned large numbers of any other breeds. I have a whole medicine cabinet to nip stuff in the bud quickly, and keep the dogs free of giardia and GI issues. The adults are pretty much fine as long as you don't mess with their food, but managing the health of large amounts of pups is tough. I've had problems with every litter so far.

The first Baron x Hime litter had their stomachs go out of control for a while. I've learned that for NK pups, as soon as I see a loose stool, I go to work. The pup's food is controlled, and they get something for their stomach. It spirals out of control pretty quickly if you're not careful (and then you spend a lot of time at the vet). The Unta x Bishoume litter had their stomach issues too, but that was more due to a lax deworming schedule, and some giardia. The Koto x Hime litter had a pup die on day 2 of unknown causes, and Taka x Bisho had one stillborn (and I almost lost another of them). 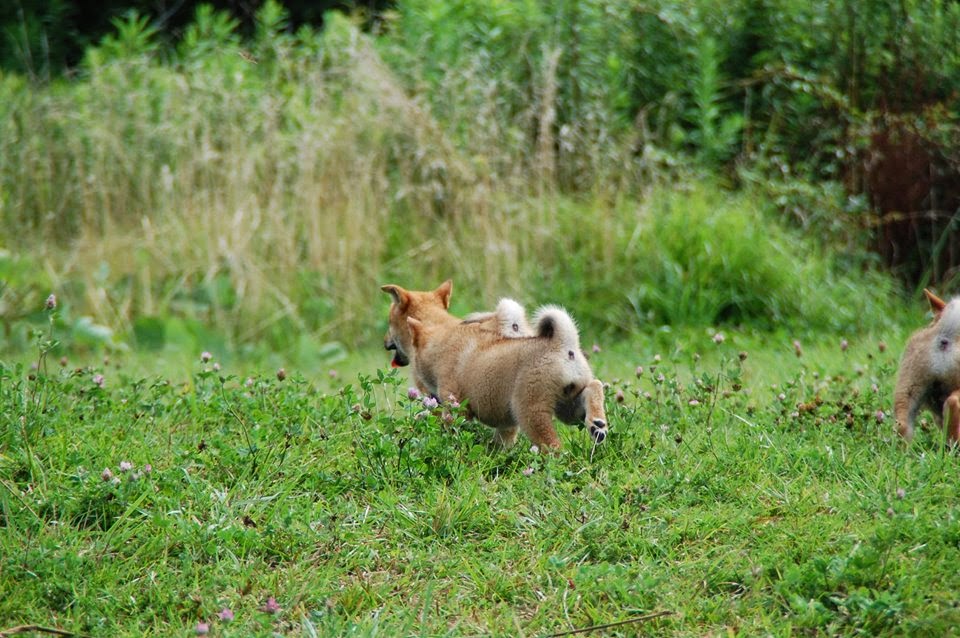 Having litters of pups means losing lots of sleep. Having litters of pups means spending a lot of time cleaning up after them. It also means dealing with health issues that crop up, and worrying about genetic issues that may (and do) arise. In the Unta x Bisho litter there is one male with a dysplastic hip. One of the pups in the Koto x Hime litter may have luxating patella, but luckily the other pups seem to be fine, though they are all a bit loose (should firm up with muscle development). All the pups in the Taka x Bisho litter seem to have slightly oddly formed anuses, one part pops out just a little bit. We're not sure if that will be a problem or not, so it's being monitored. The male in the Koto x Hime litter is now secreting large amounts of green ooze out of his eyes since receiving his combination vaccination. We're not sure if it's related, or maybe his eyelashes are inverted (doesn't seem that way). It clears up with some cleaning and antibiotics, but came back today. This sucks a bit since I want to place him sooner rather than later, but now I want to sort this issue out first. The pups in the Taka x Bisho litter seemed small from birth, and seem to have a fairly sensitive GI tract. I've only finally gotten it under control in the past 2 weeks, and they're finally fattening up nicely. 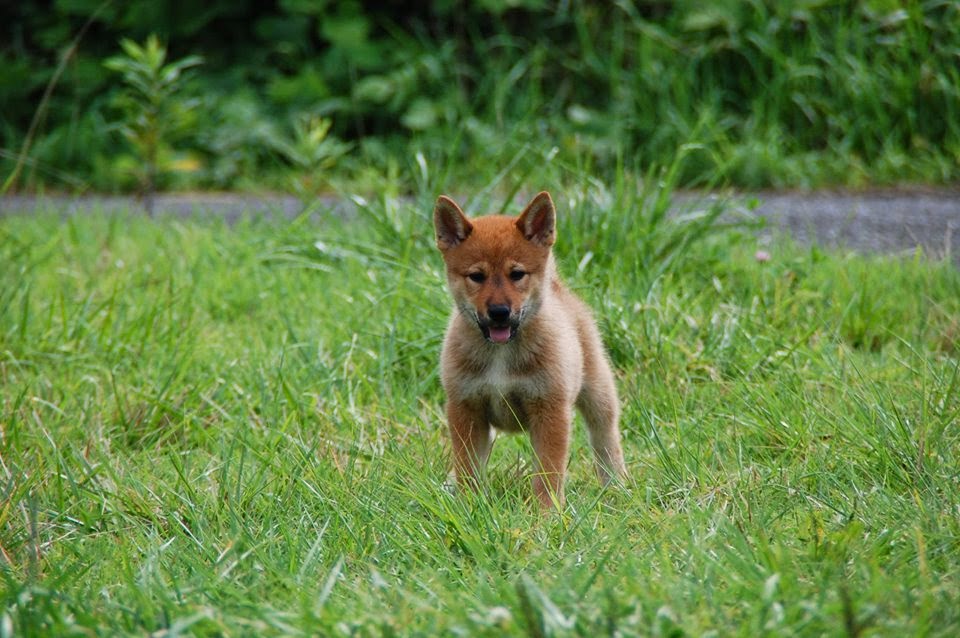 Sakura is another of my Shikoku females. I've had problems breeding her. Yano-san bred her for me once, but no pups. I bred her at the next heat, and she aborted at 6 weeks. Her current heat she refused to be bred (and while forcibly breeding Shikoku is the norm, I wanted to see if she would breed with a male she liked and was walked with every day (Taka), but no.

I have limited space for dogs, so then I need to start making choices about which dogs to keep, which to place, and which ones to retire. I will be retiring Hime, since she'll be 7 this year, so I'd like to rehome her if I can. She'd do best with a family that has another male dog, or no dogs or cats. She's terrific in the house, doesn't destroy things, is toilet trained, walks nicely on leash, and is generally a great dog. Just don't try to break into her house unannounced or deliver mail to her post box. She doesn't like the post man.

Anyway, the point of my post is to give everyone that has never managed a hugely-multi-dog-household an idea of what it's like. Oh, and along with the multiple trips to the vet, there's all the socialization for puppies that needs to be done, which has me carting them off to the hardware store, my neighbor's houses etc etc
And then of course you also have to deal with finding GOOD homes for all of your dogs (pups and retirees). That's an experience in itself.

While there are a lot of people interested in the Shikoku's well being, the vast majority are not capable or (or willing to) own more than 2 or 3 dogs. It's pretty difficult to breed better dogs (health, temperament, type) with 2 or 3 dogs, since the odds that all (or any!) of your dogs will pan out is fairly low. I am blessed to have 4 very nice female pups in the two litters I just produced. I want to keep them all for different reasons. 4 out of 7 pups is not bad at all. But, keeping all 4 will  be an issue. And then, I assume that not all of them will end up being breeding material. But, if I don't keep all 4, I lose something with each of these females that I let go. One has the eyes I want to keep, one has the ears, another has the temperament, color, structure and so on and so on.

I don't have much time to edit this post and try to make it all have a point, but I just wanted to random dump this information out there for anyone with even an inkling of getting into breeding Shikoku.

Today I had an emergency trip to the vet first thing in the morning since Goji was puking out both ends and very listless. Again, same as Riri, dead sunken eyes, and very weak, and again, no diagnosis. I know what that looks like now, so straight into the car and off to get a shot and an IV. She looks like she's feeling a lot better now.
Posted by Kato at 3:25 PM