So Baron got tagged by a boar for the first time. I've carried the fact that he's never gotten hurt in the mountains as sort of a badge, so now I have to eat humble pie and admit that he (and I) is not invincible.

It happened less than a kilometer from my house. On Sunday one of the neighboring farmers came by to ask me to clear out the mountain above his fields. There's been some damage, and the boar went so far as to make a wallow in his field. I dropped by the field on Monday morning, and sure enough it was as he had made out.

So, Baron and I talked with the neighbors up the road who were cutting bamboo, and they said they have started seeing a lot of boar tracks and sign this year. The boar are spreading south. I let them know Baron and I would be hunting behind their house, and we headed into the bamboo. 200 meters in and Baron was on scent. I waited as he pushed across the gulley and then wheeled to the right on the opposite side. I could hear something large moving a good 50 meters or so ahead of him. Baron backtracked and came to where I was. This is what he usually does when he's 'calling' me.

I walked him forward to the point where I knew he had first picked up scent. It was where the ridge we were on dropped into a marsh. He headed across the gulley again, up the opposite slope, and then down into the marsh. There was a lot of commotion, and with the amount and type of noise I was hearing I thought we may have stumbled onto a pod of monkeys. I could hear some animals running across the face of the slope across from me, less than 30 meters, but couldn't see anything due to the heavy underbrush. Baron was still chasing something in the marsh, but the animals I was following with my ears had crossed the gulley and were wheeling directly toward me. I lined up my sights where I figured they would pop out, and out came an 80kg class boar. I popped off my first shot, then went for the second but the gun was jammed. The boar careened past with a second 60kg class boar directly behind it. They headed down into the marsh.

I stayed still for a while listening to the commotion going on all around. There were still boar in the marsh, Baron in the marsh, and some other boar coming the way the first boar had. I lined up my sights again, but Baron came up from behind me, and the boar that were heading straight for me backed up. I waited for a few minutes while Baron got on the track of the 2 boar I had shot at. He came back in a minute, and I already knew where they were. I heard them sloshing out of the marsh back up to the point all the boar had originally been. Boar do this a lot. They try to stay in the general area they are comfortable in, going so far as to head right back to the same bed after we've chased them out of it less than an hour before. Of course if you push them hard enough, they usually head back on their own trail to where they spent the night before. They're kind of predictable that way.

Anyway, I got down into the gulley, and Baron went up in front of me. As he got to the top, he gave his low first bark, then his bay started. THEN the chaos as the whole herd of boar started to grunt at him. I knew what was coming next, so I tried to scramble up the slope, but the boar had started their charge. Once I got to the top I saw it was a steep slope Baron was on, and counted 6 boar clearing the area. I couldn't see, but heard him get tagged and then tussle with a boar. The spot he had been at was not a good one to face down a herd of boar, but that's the mountains for you. Baron came back up around me from the marsh, and looking at him he looked okay. He took off after the now retreating herd. We gave chase for a short distance, but I called him off since we had an appointment at the vet's for some routine work on the other dogs.

As he got to me, I gave him the looking over and found two neat holes on the outside and inside of his back left thigh. The big boar had tagged him pretty well. I called my vet as we walked back to the truck, and within an hour we were getting the holes stapled while Baron squealed in a painfully hysterical manner. We got some antibiotics for him, and then it was back to the house for some rest. It seemed to bother him after it was stapled, but by the next morning he was fine and back to his usual self, trying to play with the girls, tugging on leash on walks. He's taken the staples out twice now, but there's no point on putting a cone on him since he just destroys it anyway, and the vet's not too concerned about the staples getting pulled out. Funny thing is I was really dreading doing the staple thing again, but the second time Baron just sat there as we stapled (no anesthetic) and it didn't bother him at all. I've seen boar dogs do this before. They really have a high pain tolerance level, and as long as they know you're doing something to help and they trust you, they'll tolerate the stitching/stapling. 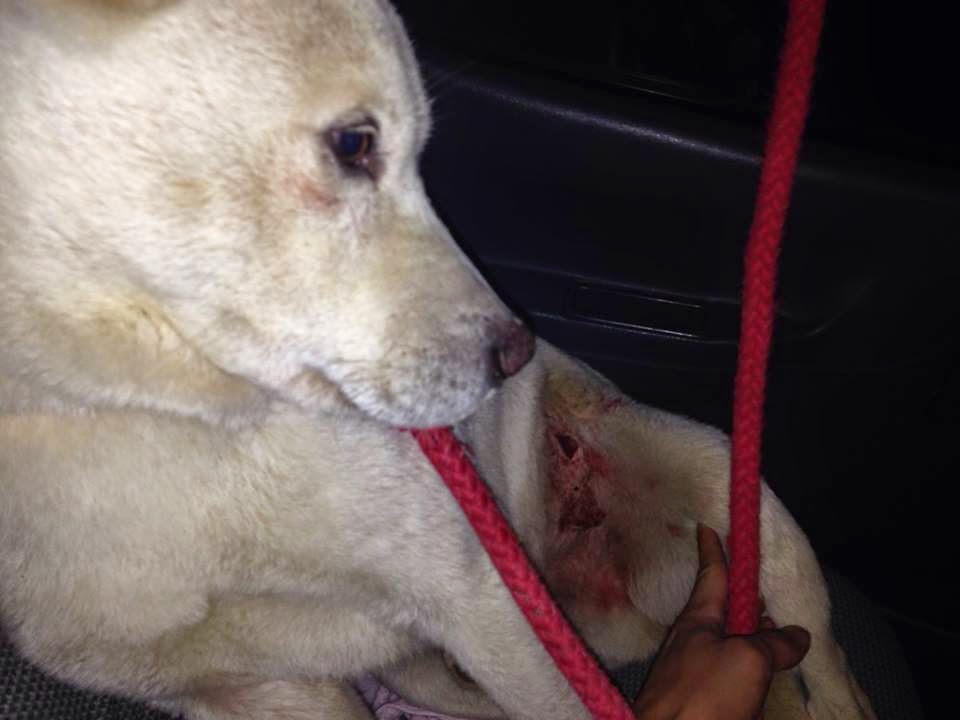 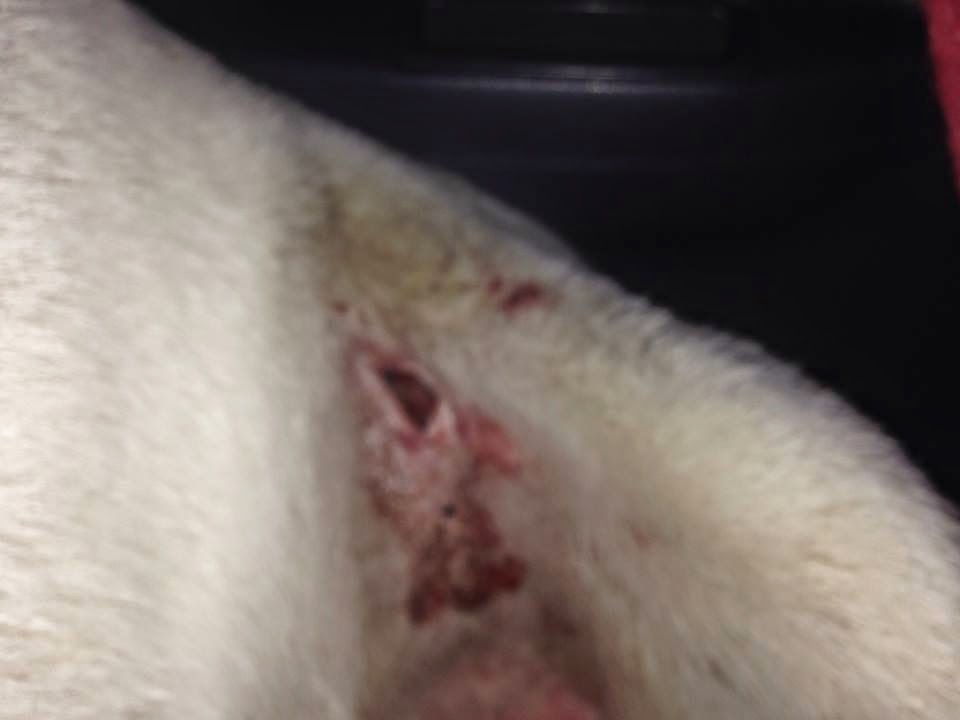 Anyway, I'm trying to make Baron rest so that he heals quickly, but he's not cooperating. He pretended to cooperate for the first few hours. 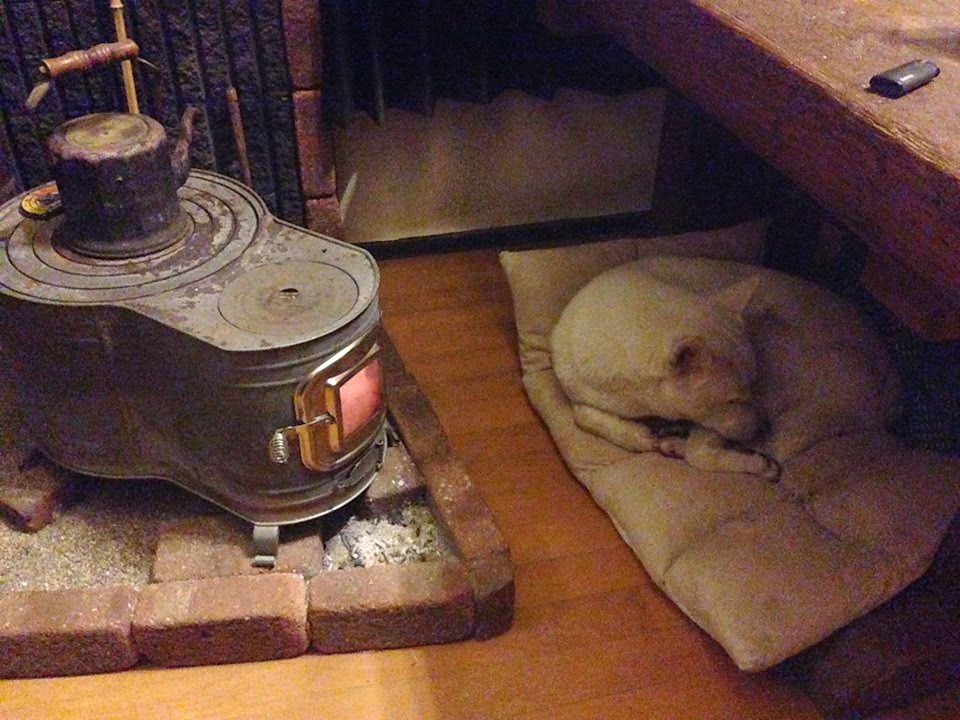 So I guess I'll be doing some more work on the house and other projects for a while. Maybe I'll take some of the other dogs out a bit for some training. Goji and Akane need to get started too. Here's my good friend Mark and I sitting on the porch with Baron the other day. It's getting a bit nippy, winter is coming. 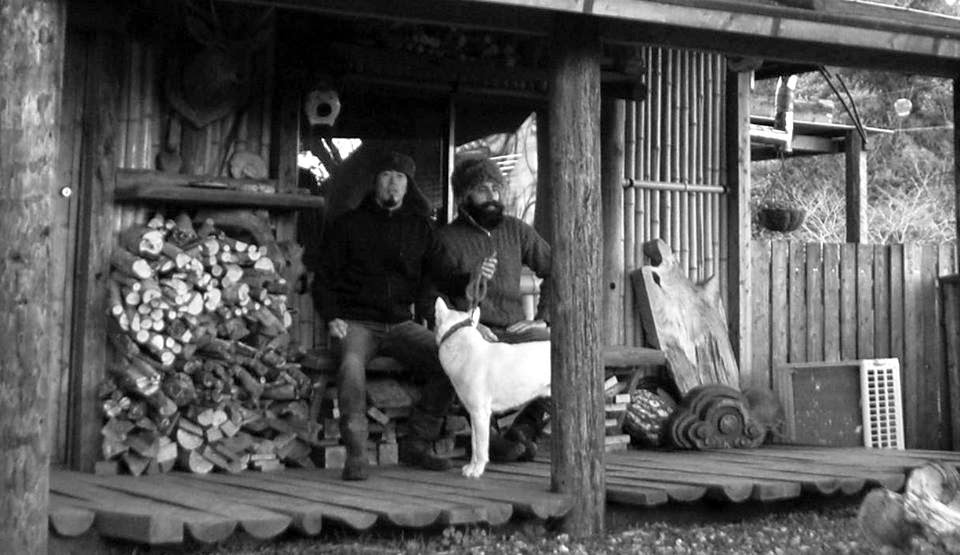