Kataki means revenge in Japanese. I've heard it used a lot by hunters talking about going after boar that have hurt or killed their dogs. I guess it's a natural emotion to want some payback. Recently I've started to feel a little differently about this aspect of boar hunting.

I guess it does seem fair to go after someone who has wronged you, but when we're hunting boar, we're the ones trying to kill them. If a dog gets injured or dies in the process, that's pretty much what we were aiming to do to the boar, so it seems hypocritical to be taking an emotional stand like that against a wild animal that's just trying to stay alive.

I just had this conversation with a hunter friend of mine last week, but it strikes home now because Baron was cut yesterday. More than revenge, I was annoyed at myself for letting this boar get away, which led to Baron getting injured. The boar won the fight yesterday and seemed pretty confident and predictable. I guessed him at 45kg, but it turns out he was 50.

A pictures worth a thousand words, and it was a good experience for Goji and Akane. 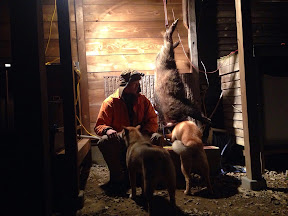 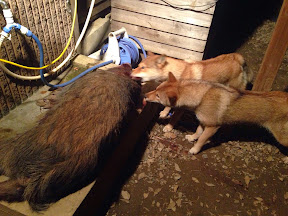 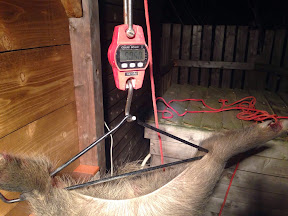