I Am Not Yakuza

All NIPPO members should have seen this piece of paper in the front of one of the last member's magazine's they received. Quite a few people asked me what they were supposed to do with it. 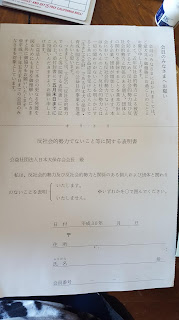 Essentially this is a pledge that states that you are not a member of, and are not affiliated with, an anti-societal group. In Japan, that's code for Yakuza. Yes, it may seem funny and unimportant to sign and send this in to NIPPO HQ. However this was one of the stipulations that the new chairman of NIPPO (the brother of the current prime minister) made when he accepted the chair. In Japan, removing the Yakuza from prominent positions in society is a big deal. All the Japanese breed clubs in Japan have probably had some issues with yakuza in the past.

The BIS prize at the NIPPO grand national is called the Prime Minister's Award, and is competed for by the dogs that have won best in breed (so the best Shiba, Kishu, and Shikoku go up against each other). The top dog receives the Souridaijinshou (Prime Minister's award), and the runners up receive the Monbukagakudaijinshou (Minister of Education, Culture, Sports, Science and Technology award).

The Japanese breeds are classified as national treasures, and that's not just a title. The government actually takes a role in guiding and as watchdog over the breed clubs, and these awards are official government awards. The Prime Minister's award has been awarded at the grand national since 1953, and the Minister of Education award has been given out even longer, since 1932.

Unfortunately, because not enough NIPPO members replied to this survey, this year there will be no Prime Minister's award given out at the national. So, I would request that if you are an overseas NIPPO member, do your part and fill out the form! Circle the spot I've circled in the below picture, and fill out the date/address/name/signature/membership number, and send that thing in to NIPPO HQ! 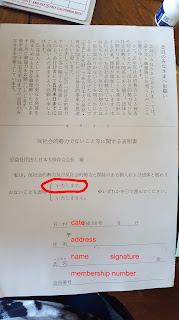