Just received member's magazine number 1. for 2019 from NIPPO. This is the issue with the pictures of all winners at the previous year's Grand National.
The judge's opinion is also in the magazine (we get this for the regional shows as well). Here's Bunta Go, Nidai Iwahori Sou, bred by my mentor, owned/handled by yours truly. He received a Souken Award (he was 2nd place in class). 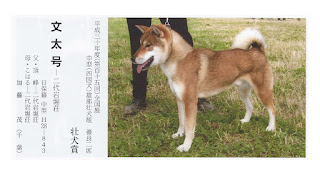 Masa placed 2nd in the Wakainu 2 class in 2016 for a Wakainu Award, and then 2nd again in 2017 for a Souken Award. With Bunta placing in 2018, that's three years in a row of placing at the Grand National. Doesn't mean that much to me since I'm not that into shows, but it is fun. A female I bred placed at the Grand National a few years back, and I have to say I was very proud of that. When a pup from a long planned breeding, born at your house and placed with someone as the best of the litter ends up doing well, it's very rewarding.
Posted by Kato at 5:30 PM