Hunting and the Nihon Ken

The Japanese dog is first and foremost, a hunting dog. It is often said that a Nihon Ken that does not hunt, is not a true Nihon Ken. Hunting is the sole reason these breeds were born, and it is the reason they still exist today. The entire standard for these breeds was written to preserve the traits seen in a sound working dog. Temperament should be strong and bold, but balanced with calm confidence, as the words 'kan-i' and 'ryosei' in the standard suggest. Structure should be athletic, showing strength, power, and agility, while movement should be light. And finally, 'soboku' describes the aura and look of the Japanese dog. It can be translated to mean an unadorned beauty, not showy or flashy, but having a natural and simplistic beauty. The hunting Nihon Ken is a beautiful animal.

Unfortunately the Nihon Ken of today is primarily bred for show, leading to a decrease in the number of capable working dogs. With the decrease in hunters in Japan, more and more dogs are bred with non-functional structure and temperaments. In Japan, the modern hunter more often than not owns one of the many purpose bred western breeds for hunting, and big game hunters often use 'ji-inu' which translates to 'local dog'. These breeds are often loosely based on the original Nihon Ken, which makes sense since the 6 Nihon Ken breeds were originally formed from dogs bought (or stolen!) from mountain hunters. These ji-inu are a mix and match of many breeds, and some also include blood from western breeds like hounds. 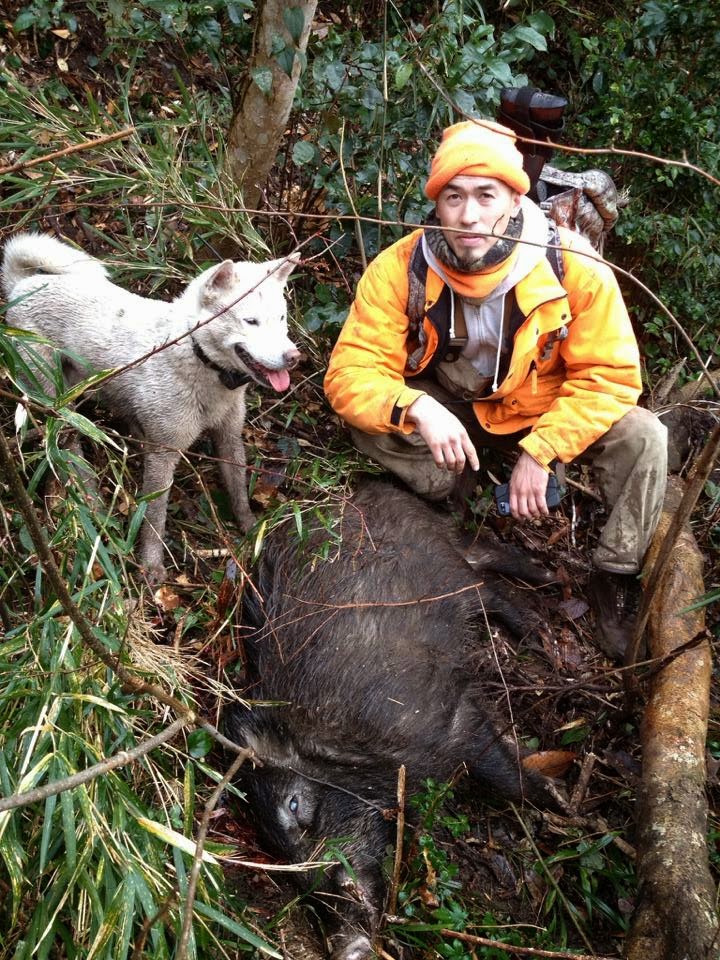 The hunting style in Japan has also changed over the years. Gone is the 'matagi' of old, the subsistence hunters who hunted large game, usually alone, and often with only 1 or 2 dogs. Today's hunter usually hunts in large group hunts (not unlike European driven hunts), with packs of dogs that flush out prey. The matagi hunted in a style known as 'nagashi-ryo' where the hunter and dog work together as a team, the dog keeping in close proximity to, and regularly checking in with, the hunter as they walked through the mountain, often for many miles.

The Nihon Ken is a hot nosed breed, meaning it only reacts to hot (fresh) tracks. The dog's job is to find the desired game, and to flush and then hold it at bay till the hunter arrives. Western breeds are often bred to a single hunting skill set. In the case of boar dogs for example, they can usually be split into catch dogs, and bay dogs (dogs that either attack and bite the boar to stop it, or dogs that run around the boar barking and dodging its charges). The Nihon Ken however is a different animal. These breeds are intelligent, with a strong prey drive, coupled with a strong natural survival instinct. They also have a great capacity to learn from experience. Dogs often develop their own balanced hunting style, combing baying with nipping and catching when necessary to stop the boar from running. They will also adjust their attack based on their evaluation of the strength of their quarry. One can often see a seasoned hunting Nihon Ken sizing up its opponent even before it can see it, based entirely on the animal's scent. 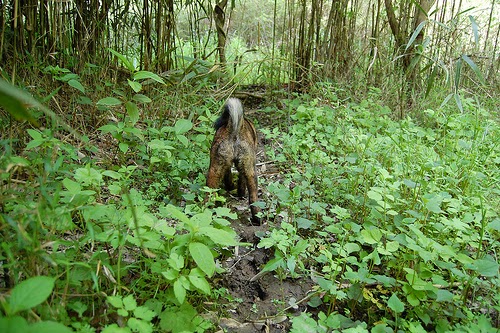 A professional hunter like the matagi had no interest in aggressive or overly forward dogs that would continually become injured when tackling dangerous game. They prized quality dogs that could be hunted solo or in pairs. More dogs means more mouths to feed, and for a matagi living in a small mountain community, feeding a large group of dogs would have required too much effort. The term 'ichijyu ikku' means 'one gun, one dog' essentially describing the matagi way of hunting. One man, and one dog, successfully bringing home meat for the table. A dog that can be hunted solo with a high success rate is a prized possession even today. 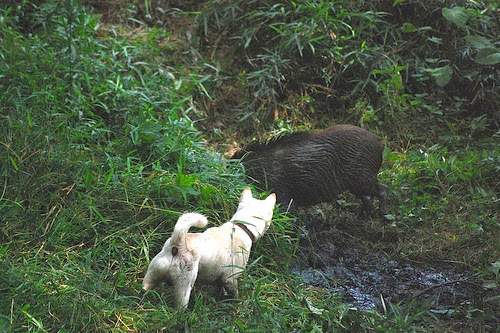 Each of the Nihon Ken specialized in hunting the type of prey inhabiting their region of origin. The Kai hunted Kamoshika (Chamois) high in the mountains of Yamanashi prefecture, which is why the breed is still the most agile of the Nihon Ken, and a terrific climber. Owners of the breed can attest to the breed's seeming love of heights and climbing, which make it a very difficult dog to keep confined. The Kishu were big game hunters, specializing in stopping boar in the mountains of Wakayama prefecture, and to this day many in the breed retain the temperament and instinct necessary to hunt this dangerous game. The breed is confident and not overly excitable, but once they are focused on their prey, they are fearless with seemingly endless stamina. The Shikoku hunted big game as well, in the high mountains known as the 'Tibet of Japan' on Shikoku island. Their athleticism, high energy, and tenacity are still evident in the breed today. The Shiba was used for hunting small game and birds, which means a fast, energetic dog was preferred. The Hokkaido specialized in hunting the dangerous Brown Bear, meaning a highly vocal and tenacious hunter, with the build and strength to move quickly through deep snow, was required. They also needed enough speed to hunt the large Ezo deer native to Hokkaido. The Akita, while greatly changed today from its ancestor the Matagi Ken, was once a medium sized hunting breed, working large game in the snowy mountainous north of Honshu.

While to my mind all the breeds have their specialties when it comes to hunting, truth be told all 6 of the Japanese breeds were all round hunters. A subsistence hunter is not too particular about what he puts on the table, and the Nihon Ken of today will hunt just about anything it is allowed to. I have seen Shiba working boar, Kai hunting birds, Kishu hunting bear, Akita hunting boar, Hokkaido hunting boar, and Shikoku hunting badgers. These are intelligent, athletic, and versatile hunters. 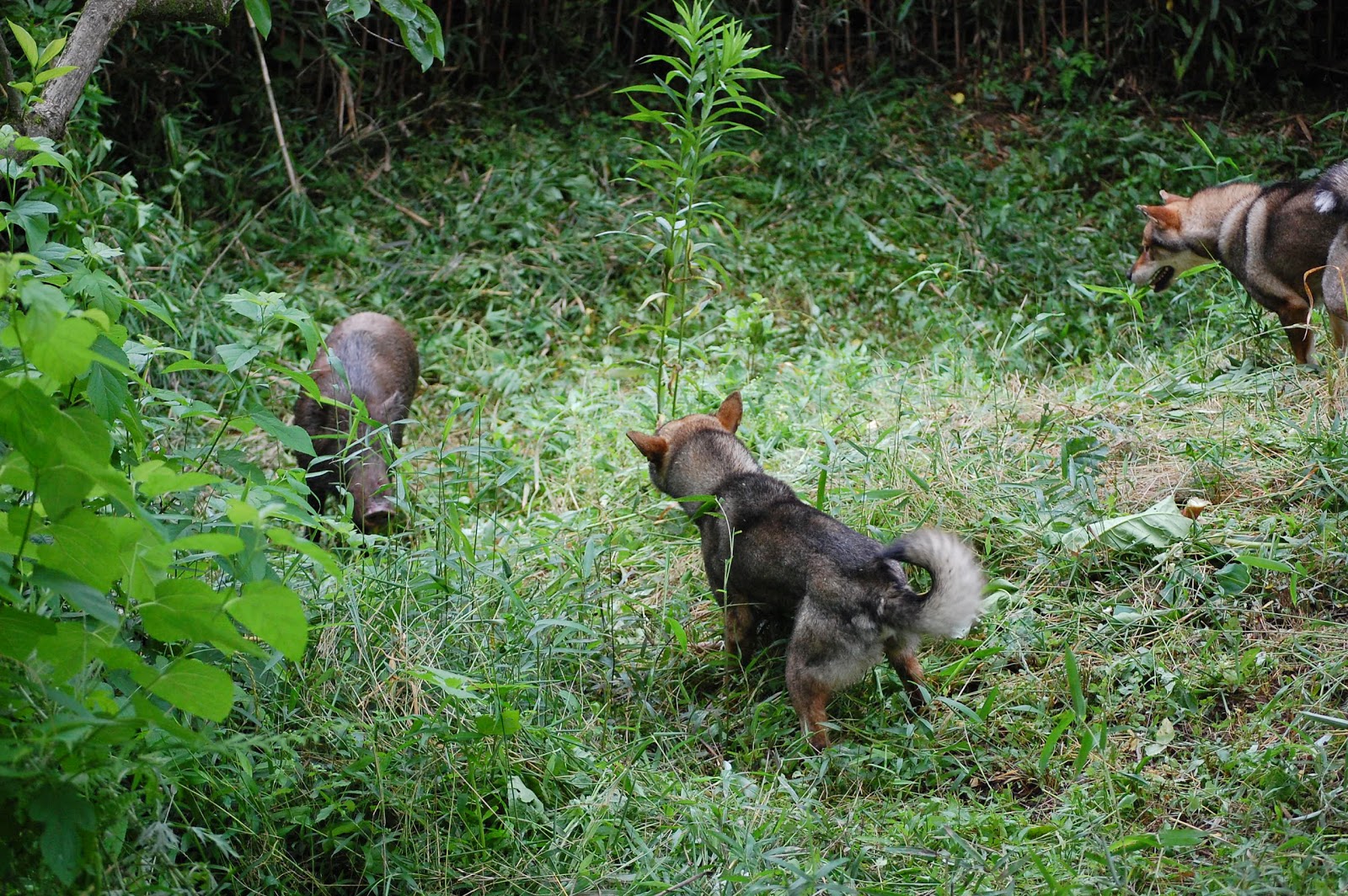 To truly appreciate and understand the totality of the Nihon Ken, one must understand and respect its heritage. The traits that draw us to these breeds are there because of generations upon generations of selection, some of it human, but much of it natural, which created this magnificent, yet primitive hunter. If we are to preserve these breeds, selecting only for show will destroy them, leaving only a shell, a beautiful dog that has lost its soul.
Posted by Kato at 11:02 PM