White/Cream in the NK


I had a question from someone about white Shiba, so talked with some NIPPO members and judges about it, and I'm adding my own thoughts as well.

Why are white coats shunned in the NK?

If you take a look at the present NIPPO standard, white is not a 'non-standard' color. You can register a white Shiba for instance. White is not however, preferred (i.e. will be severely penalized in the ring) in the Shikoku and Shiba. In Akita, Hokkaido, and Kishu, white is allowed. The NIPPO standard specifically calls for all Kai to be brindle, so white is not allowed.

Why is white not preferred? Written into the present NIPPO standard are all manner of details on conformation, among these is a clause calling for all coat coloration to have strong hues, and for judges to watch for lightening or dilution of color. Any dilution of color is seen as a weakening in the coat color genetic code, leading to loss of that color in the breed. Since NIPPO's stated goal is preservation, this is unacceptable. The standard also calls for urajiro in the NK. It is obviously not possible to judge whether a white dog has urajiro, or to judge the color hues of the genes it is carrying (other than white).

Exhibit one, the Kishu. The Kishu was not a predominantly white breed. In the early days of the breed it was predominantly 'yushoku' (having color). There is ancient art from the area depicting hunting dogs from the area as black, and looking back at some of the first NIPPO exhibitions, the numbers show roughly 70% yushoku, with only 30% of the dogs being white. Fast forward to the present day, and the breed is almost entirely white. How did this happen? Apparently there was a line with some outstanding studs who happened to be white, and they were used extensively. General preference leaned toward white these lines, and toward white Kishu in general. White x yushoku breedings result in mixed litters, but white x white breedings result in only white pups (so I've been told and the numbers seem to back that up). So here we are today, the breed has almost completely lost its variety in color. White dogs can be bred, and litters registered. While this was done possibly more often in the past when a white dog had some outstanding and desired trait, today it is shunned and almost non-existent. As I mentioned earlier, white is severely penalized in the ring, and at best your dog will be given a 'B' grade which is to say the dog has traits which make it an inferior specimen. There have been issues in the NK with urajiro creeping up over the body, and into the facial areas, and NIPPO and its members have/are breeding away from that. This issue has been seen recently in the Shiba, along with dilution of coat hues, which has lead to careful selection away from these traits. Other issues that have been seen in the past in coat colors is spotting (i.e. pinto). This is also among the list of unacceptable coat traits, which along with all the other issues involved with preserving color has lead to careful selective breeding when it comes to color, leading NIPPO members to keep the white coloration at arm's length. 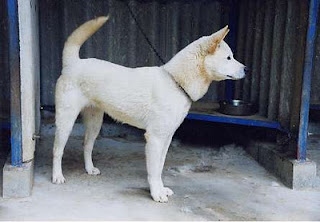 1. White Shikoku from a working kennel/line. I'm posting these pictures as examples of what can happen to coat colors in a line that is bred over many generations entirely for hunting ability, with no color selection, however I have nothing more than a cursory knowledge of the lines that this kennel breeds from, and how they manage their breeding system. This line is from the same pool of dogs as the original Shikoku, however the line is not presently registered with NIPPO. 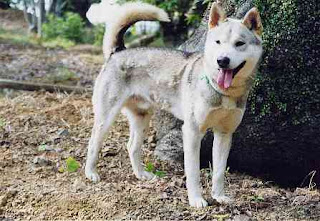 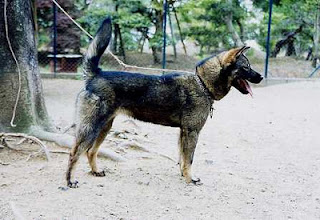 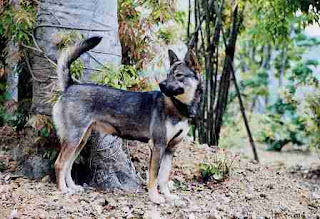 
To side track just a little, black (i.e. black/tan) is allowed in the standard, and while in the medium sized NK it is rare, and dogs with this coloration are not often shown, they are often used for breeding to improve coat quality/color. The reason for them not being shown very often is that the facial markings have to be correct, and the black needs to be a solid black hue. Often facial markings (i.e. the 2 spots above the eyes that lead to black often being referred to as 'yotsume' or four-eye) are not clear (ie blurred or misshaped), and urajiro is incorrect, plus many black dogs have red tips on their guard hairs which is not preferred. It is difficult to produce a correctly colored black Shikoku.