Hunting season is over, but the dogs and I did have some fun together through the last couple weeks. Something that really stuck in my mind was the insane speed that I saw a deer flying downhill putting out. Baron picked up a hot scent, and ran around the other side of the ridge on it. As I was following him, the deer suddenly came flying down from the top of the ridge right behind me. I don't think I've ever seen a four legged animal move that fast in the mountains. How does a canine compete with that? I guess turn it into a marathon instead of a sprint event?

I've been busy with work, and some puppy related stuff as well. This little girl named 'Sumi' went to the Netherlands. She is out of Izumo Yano Sou lines. She is a great little girl with the sweetest temperament. 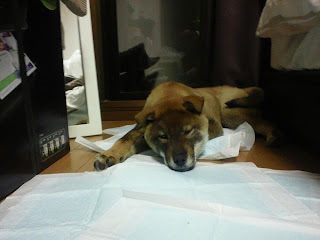 After burning the candle at both ends for quite a while, I managed to pick up the flu. Knocked me out for a few days, but I'm good as new now.

I'll add here that there are now puppies available. There are some Kai pups (even one white), Shiba pups, around 10 or so Shikoku pups (when it rains it pours!) from 5 different litters, and possibly some Akita as well.
Posted by Kato at 1:47 PM