Just got back from 3 days of hunting in a row. My body is broken, but nothing that a good onsen and massage can't fix.

Since I was going to be out there for 3 days, day 10 I left around noon and put in 4 hours. Didn't want to push Baron too hard (or myself!). I decided to check out an area that the boar are only just beginning to move into. Last year we went out there once and found a few boar.

At around the 30 minute mark Baron went after something, but not sure what it was as it was gone pretty quickly. It did come out of a spot that I know boar lay up in. It was another very windy day, and I was pretty nervous sitting in the middle of a dark bamboo thicket where I couldn't see more than a meter in front of me. Baron came back in a few minutes and we moved on. We hunted the rest of that mountain pretty tightly and well, and just as we got to the last non-hunted area Baron picked up fresh scent.

He moved downhill, and around 30 seconds later the commotion started. The underbrush was thick, prey took off with Baron yodeling a little bit. They were running far too fast for me to ever catch up, though I thought of trying to cut them off somewhere. My plan changed when I heard something still moving below me. There had been two of them in there, and one was moving toward me. In the end, I didn't even get a glimpse as the undergrowth was too thick, and I couldn't ID what it was that Baron was after. Boar? Deer? He gave chase for a good 600 meters before coming back. 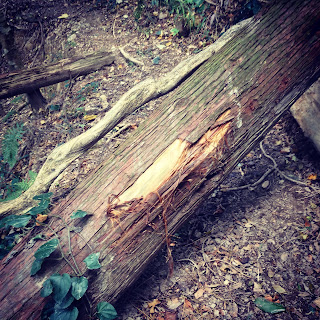 Day 11 it was me and Baron again, and my plan was to go after the big boar that have been getting away from us. I had an inkling of where they were, on the far side of the high peak in the area we hunt. It took us about an hour and a half to make our way out there, but we found a nice long sliver of a ridge with small branches that looked promising. We've never hunted this spot before, so in we go. Baron's immediately moving around and searching, but branch 1 nothing, branch 2 nothing. Baron moves ahead to branch 3, and then I hear Baron's low, loud bay.

Running forward I get above the gully between branch 2 and 3, and it's war down there. Baron's baying, several boar are grunting, and I can hear them charging him. The boar are coming out of branch 3 now, around 60 meters below and to the right of me, the whole herd being led by 2 huge boar who are intent on chasing off this annoying dog. I've loaded my Benelli and I'm looking for that moment when I get an open shot, but they're still in underbrush and it's hard to get clear looks for more than a second.

Around a minute has passed since Baron found the boar, and suddenly I see the whole herd below charging Baron. He turns and runs at full speed back to where he last saw me on the ridge, then wheels on my scent trail and catches up to me on the high ground above the boar. The sounds from the boar seem to say they are calming now that the threat is on the run, but as soon as Baron gets to me and we make eye contact, he's going downhill and baying again. Each time he goes in, they feint toward him, moving forward around 5 meters or so. Before long Baron has them just under 30 meters in front of me, and the last charge forward by the two big boar is all I need.

At 20 meters the boar charge stops, and I have a clean line on the second largest boar's head. One shot just above the middle of the eyes and the boar rolls. The rest of the herd scatters, though they did stick around close by for a while which was a bit scary for Baron and I. I thought the boar was large, but didn't realize just how big till I started moving it. At 11:30 I started moving it out of the mountain. The gully was one of the worst I've ever shot a boar in, full of fallen timber. Managed to find an alternate route out of the mountain 300 meters through the gully as opposed to 2km back to the truck, but it was back breaking dragging that sow over and under logs. It took the rest of the day, but we got home just after sunset. 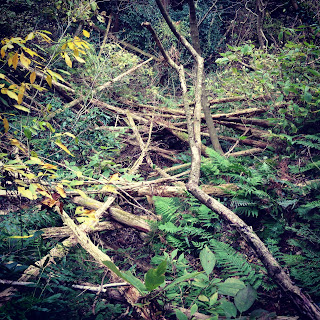 We don't have a proper scale for large boar at the moment, but weighing all the parts later, we came out at over 70kg. It was a sow, fattened up for winter with some excellent meat. We had an excellent 'shishinabe' (boar miso pot luck) that night. This is the largest boar Baron and I have taken together. 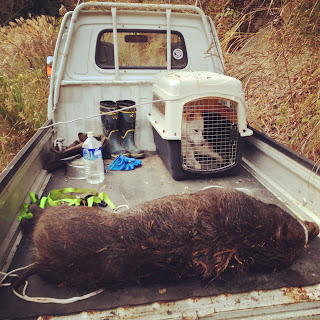 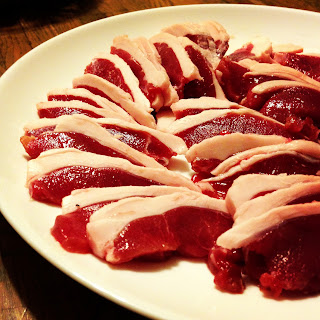 Day 12 my brother came out with us, and we decided to hunt another new area. There was plenty of boar sign, but we didn't run into any boar for the first few hours. Just as we planned to break for lunch we heard some noise from the ridge opposite the one we were proceeding downhill on. I was starving and wanted to make lunch a priority, but my brother wanted to check it out. So in we went with Baron. He immediately went down into the gully in search mode, and we moved above him on the high ground. The wind was against us.

There was a boar trail around 2 meters below us. Baron looped forward and then up and back around toward us. Just before he got to us, we heard a loud crash. Did sound awful lot like a boar, but no bay from Baron, so I thought it might have just been him. Nonetheless the gun was loaded up, and Baron got to us seconds later. As soon as he saw me he moved back to where we had heard the commotion which was around 10 meters or so in front and below us, and that was when things sped into motion blur. A boar only slightly smaller than the one from the day before came charging out at Baron, giving me a split second to fire at it at around 2 meters away. I missed, the boar ran, Baron chased, hard. He really wanted that boar. He chased for a good 700 meters and try as we might to catch up, they crossed too many gullies for us to ever have a chance. My body was also completely giving up on me. In the end that was all we had to show for the day.


We had a couple great boar sandwiches made by my bro, and found a really interesting piece of driftwood that I gave to a friend who does a lot of wood work, but that was it. Once back on the mountain road walking toward the truck, we ran into some gentlemen walking what looked like a large Flat Coated Retriever. Baron and the dog stood rigid for a second, but as the men moved off and their dog tried to follow, Baron tried to scuffle. Thankfully the other dog was absolutely oblivious and kept sauntering along, and Baron stopped being an ass. Baron escaped from my brother's house last week early in the morning, and got into a fight with a male dog from the neighborhood. This is the first time he's ever fought with another dog, and I was very disappointed with the situation that allowed it to happen as I've found that once a dog has fought, it seems easier for them to cross that thresh hold and do it again.

In this case, the dog that Baron fought with is another intact male that is very vocal and dog aggressive. They've met on walks before with the other dog lunging and barking at Baron. The other dog was injured in this scuffle, and had to be taken to the vet. All in all it was a good lesson in management, for myself and for my brother. A dog is never 100% what we would consider 'safe'. They are living creatures, with minds of their own, and can be a liability if not managed properly. In this case friends who were coming in and out of the house left the door open. Almost every NK male I've seen is either same sex aggressive, or very picky about the dogs they get along with. A lot of this can be chalked up to the way they are kept here in Japan, but they are definitely not as dog friendly as many Western breeds. Even a dog like Baron that's been pretty dog safe his entire life and been raised more in the style of a companion dog, has his moments.