There's so much going on, I just can't keep up with writing about all of it. If I'm going to bother writing at all, I want it to be a decent read, though every once in a while I'm tempted to go the route of, 'Went to mountain. Baron found boar. I shot boar. We ate boar.'

Anyway, day 13 was January 3rd, first hunt of the year. A friend of mine who also hunts, wanted to tag along, and bring some of his son's friends. They work in a restaurant that has wild game meat on the menu, and were interested in seeing how that meat ends up on the table. I'm always getting requests nowadays to do the guided mountain tour, and I'm usually happy to oblige them, but less happy once we start walking together. Everyone has trouble keeping up, and we probably sound like a marching band moving through the mountain. Baron got on a boar pretty early on, had it bayed for just a little bit, I ran up just as the boar charged him, then wheeled and took off. Baron ran to avoid the charge, and I saw the puzzled look in his face when he turned around and there was no boar left. 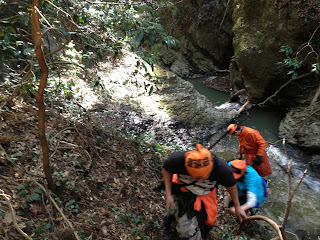 Momo, an adult Kishu female I used to own, had a nice trick in her bag where she'd run to avoid the charge, but not in a straight line. She'd run in a circle, always looking back at the boar. As soon as the boar stopped, she'd go back after it.

So this first boar got away, and a second small runner was all we bumped into after that.

The next day, number 14 of the Baron boarfest, I headed out with my brother, pushing further back into the area we've been focusing on this year. This was the first time I've hunted this part of the area, but we found a nice trail to walk. Around 30 minutes in, Baron moved downhill, and I heard the tell tale sound of a boar busting through the undergrowth. This one was a runner as well, and I was a bit pissed because we were just walking above a small hamlet, and the boar was running straight down to it. We ended up having to do a forced run at full speed 1.5km downhill in full gear, only to get to a bamboo thicket above a stream, where we found Baron had lost the boar. It was a hot, long, sweaty march back uphill.

Once back up at the top, we started on our merry way away from civilization, and around 5 minutes in, we could see Baron had picked up scent. We were on a trail, with around 80 meters of slope below us, a bit of underbrush growing up through a thicket of pines. Baron moved slowly and carefully, around 15 meters below us, while we moved quietly, waiting for the inevitable bay. When it came, we experienced a repeat of the boar orchestra. The deafeningly loud sounds of an angry herd of boar is awe inspiring. I moved lower, Baron slightly in front of me, baying the biggest of the bunch.

I stopped 10 meters above and behind him, and suddenly 3 little boar ran up toward me and froze 3 meters away. The boar were all glued on Baron, and absolutely oblivious to me. I asked my brother above me whether he wanted a little one or a big one. He wanted the big one. So, I waited for a shot, trying to line up the large female. The boar charged once, then moved back, trees were in my way. Baron got a bit close, and she came after him, barreling past me, but too close behind Baron to take a safe shot. Baron moved downhill, the sow after him, and he got barreled over, after which the boar decided she'd had enough and made her getaway downhill. Baron chased the boar for a bit, and while my brother and I were planning our move to cut off the herd, he came back.

By this time we assumed all the boar were gone, but Baron moved behind us, uphill around 5 meters, and started baying. My bro thought that he was just reacting to the fresh scent still lingering, but I reloaded, and moved around below Baron. Sure enough, a nice little boar was in some underbrush. I popped off a round, the boar dropped downhill, injured, and Baron caught it. While I wanted to take the second shot, they were moving around a bit much, and since the boar was small I told my brother to grab it. Not so cool since he ended up not grabbing the back legs, he tried to pin the boar down, and Baron adjusting to get hold of the boar better ended up nipping his hand. I have to admit that this kind of happened because I was again trying to break out the camera, doh. Anyway, we got the boar, around 30kg of him.

The next day, day 15, my friend came out again. His bike broke down on his way over, so I hunted with Baron in the morning, going after the herd. We didn't get to them, as we hit deer first. I've never seen deer in this part of the prefecture before, but we found some large beds, prints, markings, and droppings. Of course, Baron then inevitably found something (I assume the deer), gave chase, and ended up 2km downstream. I kept fairly close for just under a km, but then gave up and waited for him to come back. We trudged out of the mountain together to pick up my friend, and together we hunted the rest of the mountain. After around an hour, Baron moved downhill and started running. While I never got a look, following his track later we found a couple mouthfuls of deer fur. Seems Baron got pretty close. At least he came back quickly this time, after around 200 meters.

We were running out of time, so started heading off the path and through some heavy undergrowth on the most direct route to the mountain road we could walk back on. I ended up guiding us into the wrong ravine, but as luck would have it, we were in the right place. Climbing out we had bamboo all up the right slope, but moving past it we found a spot to climb out. Baron moved past us, and into the bamboo we had just walked underneath. I whistled my command to tell him we were going the other way, and while he acknowledged me, he disobeyed and headed into the bamboo. Sure enough seconds later there were fireworks set off in the thicket, with Baron flying off after a fast moving large boar. I heard Baron get charged around 50 meters away, and he came running back to get us. As much as going into the bamboo is a pain, I trusted him, and followed, and moments later Baron wheeled below and behind us to flush a smaller boar. It ran directly toward my friend and I, and we fired at exactly the same moment, and the boar rolled. It was 4pm, and we had our boar. Carrying it out of there was not exactly fun, but that's all part of the hunt. The larger boar was still moving around nearby, but we were out of daylight to go after it. 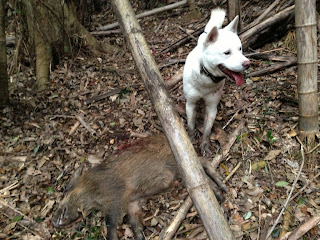 So that brings us to 9 boar in 15 outings this season.