Day 16 was another beautifully sunny day, solid blue skies over the Boso peninsula. Just Baron and I today, which he likes since he gets to sit up front in the truck instead of in his crate in the back. Driving to our hunting spot I was flagged down by an old guy driving by in the other lane. As we got out and walked toward each other, I recognized him as a hunter my brother and I had run into before. These were the guys walking their big black retriever like dog that Baron tried to tustle with. 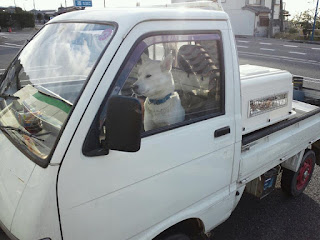 He told me that two days ago there'd been an accidental shooting. One of the guys in his hunting group had shot someone in the mountains, so his group was going to take the rest of the year off. It's a big deal here in Japan when there's any sort of crime or accident involving firearms, so the police, ambulances, doctor helicopter service etc had been all over the mountain I was heading toward. We said our goodbyes, and I headed on my way. Wasn't too much point in talking about it, and not too much point in heading to a different area. But seriously, another hunting accident? Later on in the day I found out more of the details since with the local dialect the old guys use, it's often hard to catch everything they're saying.

Well Baron and I hunted the area top to bottom. Nothing. Guess with all the noise and ruckus, the boar had decided to head for quieter spots to sleep. Baron and I pushed far back, and then swung all the way around down toward a little village and some fields. A few hundred meters from where we'd hit the first fields (thanks Google Earth), we descended and opening in front of us was a marshy area. There were some fresh tracks going through, and some boar wallows to look at. As I passed one, I saw what looked to me at first like a yellowing melon, laying on the ground. Boar eat pretty much everything, and I'm curious to see what they've been up to, so I gave it a little kick. The impact, and sound it made, told me this was not a melon. It was a skull, a couple sizes smaller than my head, but the front facial part was missing. Since there are a lot of monkeys around, I chucked it into a plastic bag to study when I got home, and Baron and I moved on.

Walking through the village, an older gentleman came strolling toward us with a large yellow dog off leash. The dog was very polite and stayed away from Baron, who was not freaking out, but obviously not thrilled to see this dog. He was giving him those low growls, and mini lunges. The gentleman started talking to me about the shooting, and I discovered that the hunter had shot one of the locals who was out collecting mushrooms. It got worse. The guy who got shot owns the mountain. And worse. The guy doesn't have the use of this left arm from a old accident. The hunter shot him in his right arm. Seriously? Firearm safety is no joke, and yeah accidents happen, but at least know what you're shooting at. In this case his hunting dog was barking at the mushroom collector, and the hunter thought the guy was a boar.

Well we had around an hour and a half before sunset, and needed to cross the mountain to get back to the truck. Taking a different, direct route toward the truck (first time on this ridge), we ended up in a crazy bamboo thicket, 100 meters above the mountain road the truck was parked on. All of a sudden Baron starts to go a bit batty, and moves into the bamboo in search mode. I loaded up, quietly waiting at the edge of the thicket, where pine forest meets bamboo. A minute later, the tell tale thunderous snapping of bamboo as the boar gets up and charges Baron. Baron comes running out, looks up at me, and I whisper 'yoshi' (good or go in Japanese) to him, and he goes back in. I'm right on his tail, and almost immediately I hear the boar coming for us. At around 5 meters away I finally see a large black boar rushing toward us. I line the sights on her, she's coming almost straight at us, and bam, she drops. Baron rushes in at the sound of the gunshot, and runs right past her. Brilliant. He runs a circle, and comes back to where she is, and I put one more round in the head for good measure. 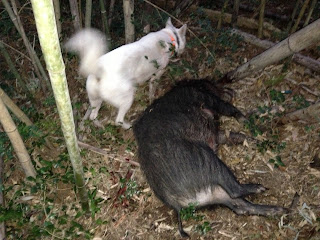 She weighs in at 69kg, a very long, but not extremely fat female. Still, it's sunset, and now I've got to carry her out. It took around 2 hours to get through the bamboo, to the truck, and then exhausted, 20 minutes to get her onto the truck. While I'm doing this, Baron goes back into the mountain in the dark, and starts baying up a boar. He stayed up there for 30 minutes baying, and no amount of calling would get him back down. He and the boar kept moving around, and when they were around 80 meters from the truck, I went up with my Maglite and dragged Baron out.

The next day, I did a half day with two other hunters in an area over run by Muntjac, an introduced species of deer. Baron was all over them and all over the place for the 3 hours we had, though at one point we did find a 40kg boar, but all it did was run as well. Baron was too tired to keep up.

That night I pulled the skull out of truck, comparing it to pictures of the skulls of Japanese Macaques, but it wasn't matching up. Eyebrow formation, and spots where ear and jaw would connect, were wrong. Size was also far too large. The only other animal in Japan with a skull like that is a human. Taking a look at pictures of human skulls, I found a match. Called the cops the next day, and they came to pick it up. We had a blizzard move in which was insane because the day before I had been in a t-shirt. Day 18 of the hunt, my brother and I had a police escort into the mountain as we took them to the spot where I had found the skull. 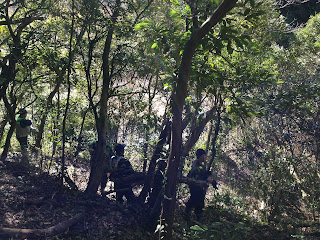 They took a great deal of pictures, and combed the area. We stayed and helped till noon, then took our leave to hunt. The cops were a bit lost in the marsh, they're definitely not outdoorsy types. It seems that a few years ago there were two separate incidents where old men went into the mountains above the village and were never found. Hopefully the police find out who the remains belong to so their families can have some closure.

My brother, Baron, and I, walked to the ridge opposite, and headed up. Around 20 minutes in, Baron was on track. He kept coming back to get us, as he seems to do a lot nowadays on larger, or feisty boar. We climbed down into a ravine after him, then back up the other side. Another 100 meters and we reached an area overgrown with thin bamboo stalks. You can't see a meter in front of you in this stuff. Baron went through it a few times, but nothing, so we walk through it. On the other side, there was a slope planted with low palms. Every time I see these in the mountains, a little drumroll now plays in my head. The boar love laying up in them, and today, this guy decided to hide out in there. My brother heard Baron's single bark, and as we moved toward the spot, Baron came running out to get us. I whispered 'yoshi' again, and he went back in, and started baying.

I handed my iPhone to my brother to get some video (someone slap me please), and moved closer. Baron got charged, and he ran out the side opposite where we were, then looped back around to me. Another 'yoshi' and he went back, getting charged immediately and then a yelp. Baron came back out with a bloody mouth. Of course my brother missed filming all of this, haha. It seems like Baron couldn't get out of the way fast enough, and he and the boar ended up biting each other head on. Baron was pissed off and kept running in and out looking for the boar, and I was looking for him as well, but it was gone. Baron was bleeding, but wouldn't stop for us to take a look, and he got on the boars track and took off. He went around 600 meters before coming back. By that time the bleeding had stopped, and a look in his mouth showed a little lip and tongue damage. Looked as if though he might have accidentally done the damage to himself. Anyway, Baron's first injury on boar, but it didn't require any medical attention.


We only had 4 hours total to hunt in the afternoon, so we did one more swing around the ridge, found nothing other than this little guy. Looks like a Marten that's not yet in full winter coat. He was really inquisitive, and we kept Baron away from him.


Well that's 10 boar on 18 outings this season for Baron, though I'd rather not be counting these half days.