Blogging this again since I have found another copy this week. This is a rare one. It's an old book, so has a bit of wear showing on the covers.

This monster of a book comes in 2 parts and was published to commemorate the 50th anniversary of the founding of NIPPO (the Japanese Dog Preservation Society). It contains everything NIPPO published from 1932-1978, including breed histories, standards, show results, pictures of winners etc. It's extremely hard to find now as it's long out of print. Brad Anderson of Yamabushi Kennel has what is probably one of the only copies in North America, and it is probably one of the only copies to be found outside of Japan (other than the last one I found which was sent to Romania).

If anyone's interested in owning a copy, feel free to contact me at kato.the.walrus@gmail.com and I'll figure out how much the shipping etc will cost. I've found a few copies of this, and they tend to cost around 15,000 yen + shipping. 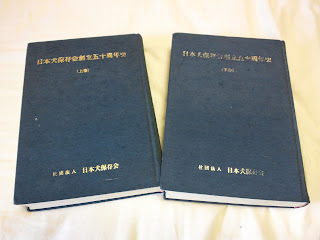 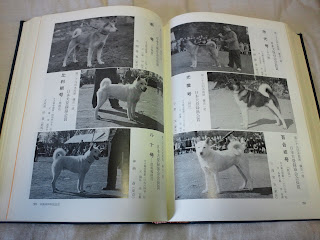