Showing a Dog at a NIPPO Show

For anyone that's interested in how it goes down...

First off you'll need to be a NIPPO member, and have a NIPPO registered dog (obviously). There's an entry form to fill out in Japanese that is fairly straightforward, basic personal and pedigree information needs to be entered. The form is pretty much the same for regional's and the Grand National, with the requirement to show at the national being that the dog has to have received a 'yuryo' ('A' or 'excellent') evaluation from a judge at a regional. Handlers are allowed, but the vast majority of dogs are shown by their owners.

The main desk usually opens at 8am and this is when youpick up your entry number and a show catalogue. Judging on the day of the show generally begins at 9am. Preparation before entering the ring usually entails a wipe down with a wet cloth and some brushing, but there really isn't much primping going on at a NIPPO show. The idea is to show the dogs as close to their 'natural' state as possible. 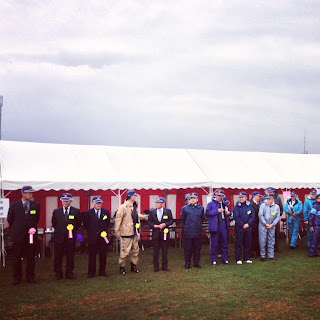 Here are the entry classes:

There are Yochiken (under 4months for small type, under 5months for medium, under 6months for large) and Youken (4-7months small type, 5-8months medium, 6-10months large) classes, but only at regionals. Also, at regionals, all the medium size breeds are shown in the same group.

Of course males/females are shown in their respective groups in rings which are roped off squares. Each ring has it's own judge and junior judge.

Round 1 begins with dogs entering the ring according to their entry numbers. Teeth are checked (every Nihon Ken should have 42!), and the judge starts the 'kotai shinsa' (individual specimen judging). Dog & handler are called to the center of the ring where the judge evaluates the dog's confirmation to the Nihon Ken standard. After he has finished his examination, he will let the handler know that he will now wicket the dog. After wicketing the dog, the judge will motion to one of  the three white markers arranged in a triangle within the ring, and will then judge each animal's movement by having the handler walk the dog from each marker to the next, stopping in front of the judge after the last marker. He takes one last look, entrants bow to the judge, and the next dog is called to the center of the ring. 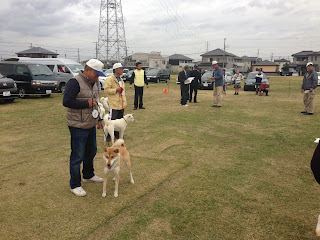 After all the dogs have been examined, and a break is taken for lunch, round 2 begins. This is the 'hikaku shinsa' (comparison judging). All entrants are brought into the ring, again lined up in numerical order, and the judge slowly moves through the ring comparing the animals. He (there are currently no female NIPPO judges, but we will possibly have one in the near future) will then call a few dogs into the center of the ring. This is the group he judges to be the best dogs in class. After a few more moments, the judge will begin lining up the dogs from 1st place and on down the line. These are temporary placements, as once all the dogs are lined up the judge will take one final look. It is not uncommon for a dog to be dropped a placement or two if the judge feels it is warranted (ie a dog drops tail etc) The judge then takes off his hat and bows, signaling that the placements are final.

At the regional, there are then 'honbusho' awarded which is something akin to best in show. The number of honbusho available at a regional varies according to how many entrants there are. A dog that has won 6 honbusho receives the title of 'kansei ken' (finished dog), like Gonta here, and can then no longer be shown at regionals. 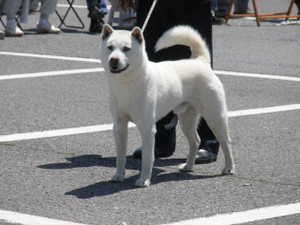 At the NIPPO Grand National held once a year in the middle of November, the best male and female from the Seiken (adult) class compete for best of breed. The Kishu, Shikoku and Shiba Best of Breeds then compete for 1st place in show which is the prime minister's award. 2nd place receives the education minister's award, and 3rd place, the cultural minister's award.

Some extra information: dogs are given evaluations ranging from A - excellent, B - good, C - fair, D - ok, E - disqualified. Most dogs shown at NIPPO regionals today receive the A evaluation. Anything less and the dog is not really worth showing (and cannot be shown at the national).
Posted by Kato at 11:03 PM