I've been way too busy moving house, working, and getting into the mountains. It's hard to keep up the blog!

Day 19 I took a good friend of mine out with me. He's a paratrooper in the JSDF and we actually were going to originally get our hunting licenses together way back when. We had a great day, in some great weather. Baron got on a boar right off the bat, but while I got to within around 10 meters, I couldn't get a look at it in the heavy brush. This one got away. Later on in the day Baron peeled off into a small ridge to our left, was gone for a bit, and came running back. When he saw me, he gave me THE look. We followed, Baron moved forward, and came back quickly. We could hear them coming for us. An angry herd of boar with a huge female in the lead was marching down the trail toward Baron. They got to within 5 meters before I started firing. I put out three shots, then reloaded, with the herd still milling around in front of Baron and I. First 2 shots I fired at the lead female, the second 2 were at the second largest boar. First one hit it, and it was wobbling, so I reloaded to take the kill shot, and my buddy stepped in front of me excitedly proclaiming, 'You got it!' Famous last words. All the boar took off after this, and while we did track them and the small blood trail from the one injured boar, they were running for the hills. Baron tracked them another 2km further than we did. I hate injuring animals and leaving them in the mountain. Every living creature deserves as free a life, and as quick a death as possible, but life and by extension we, are imperfect. 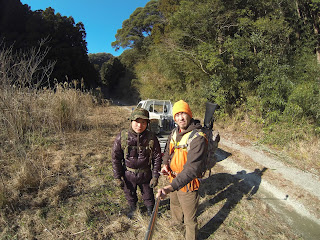 Day 20 we figured there might be a few stragglers from the herd left in the area. I'd noticed the large female took off in a different direction from the herd the day before, so we went out to find her. We eventually did, but moved into a strategic disadvantage downhill from where she was bedded up in thick underbrush. Baron had been picking up scent and going down in and out of a gully, so I mistakenly thought she was down there. By the time Baron went around the ridge and up to her nest, there was no way we could close distance. She ran off in the direction the herd went the day before. We pushed hard the rest of the day, but had no looks at any boar, which surprisingly has not happened very much this season.

Day 21 I went out with my brother, but nothing very spectacular happened if I remember correctly. Day 22 I hunted an area where the boar have just started moving into, and it's 10 minutes away from my new house. I've seen some box traps going up, and the other day the paratrooper and I saw a boar crossing the street in broad daylight. It stopped above a field on the other side of the road, and I mistakenly thought it was a gun hunting prohibited area. Found out the other day that it wasn't, so I headed in to survey the boar situation and population. Turns out there are definitely only a few individuals, but I imagine with their reproductive rate we should see some expansion over the next two years. They'll probably start being a real nuisance to the farmers by then. We basically just went on a walk for a few hours. 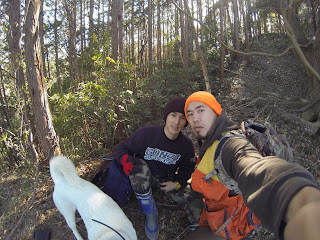 Day 23 was just Baron and I, hunting fast and covering a lot of ground. Day 22 and 23 I only hunted for four hours in the afternoon. We came upon boar almost immediately, Baron going after them and coming back regularly, baying, but never quite holding them long enough for me to cut them off. This was another herd, and they're pretty difficult for a single dog to tackle. The boar basically look like a NFL defensive line bum rushing the QB. At one point Baron did go over 2 ridges and into a gully and was there for a while, I wasn't able to get there in time, but when he came back he had some blood spray on him, so he'd been in close quarters with one of the boar. As luck would have it, and as we were running out of sunlight, in the last bit of mountain above the truck, Baron lit off over the largest peak. He returned after around 10 minutes, and when I started moving toward him, he headed over the peak again. I finally gave in and climbed it, only to realize he was now moving rapidly away.

He stopped for a while on the road the truck was parked on, and again in the stream below, then took off on a marathon. I imagined he was on a deer, and was pissed that he was chasing a 'runner' so hard, but then I realized he was almost a kilometer away, but wheeling toward some fields that I could get to in the truck. I raced to it, and flew down to cut him off. They were coming through a bamboo thicket just above some rice fields. Unfortunately I misjudged the spot by 20 meters, and they crossed the road above me. As I got there I looked downhill to my right and saw Baron on track. He was not interested in coming back, and I had around 10 minutes of daylight left. Whatever was running had gone into a tiny clump of mountain that is ringed by roads, and I know all the passes. As Baron gave chase through the mountain, I kept moving to cut them off. Finally they were coming to a spot I knew they would cross, so I parked the car and raced into position off the farming road (in Japan we are not allowed to shoot from or over roads). I heard something cross the road and into another bamboo thicket directly in front of me, with Baron close behind. Following the sound I finally made out the form of a small boar moving through the thicket trying to find a way to lose Baron. He picked the wrong spot to come out into a clearing, and I nailed him.

I had already worn out the GoPro battery by this time, so again no video. Bummer. I've taken some test video on different settings and have been extremely impressed. I love this little gadget. Now I just need a computer that is powerful enough to edit properly!