3 friends came out with me, shovel dude and another friend from back when I used to play basketball, plus a hunter buddy. We headed to Kamogawa, an area near a dam that has a lot of deer and muntjac, not so many boar. The reasoning behind it was that it's an easier area to walk and drive to. My truck broke down the night before while driving down from Tokyo, fan belt busted just before I needed to pick up a Shikoku puppy that will be going to the States. We ended up doing a 3 hour tow through the mountains, getting home in the middle of the night.

It was another dazzlingly sunny day, fairly warm. We got into the mountains and were immediately stumbling on muntjac right and left. They're an introduced species here, they were let loose when a private zoo went bankrupt, and their numbers are rising. Baron took off after something, so I followed, heard him baying, and found he'd chased a muntjac into a pod of monkeys lol. I wanted to film it, but didn't want Baron to get the idea I was interested in any of it, so we walked away... and onto more muntjac. That was pretty much how the day went, though at one point way in the back we did find some boar, a runner. I almost caught up to them, was 100 meters away when Baron lost it.

We only walked for a couple hours since some friends of mine were coming down from Tokyo in the evening to stay the night, and hunt with me the next day. Once we got back, we had a terrific night with an outdoor BBQ/shishinabe (boar potluck), copious amounts of excellent organic wine, beer, all this a couple minutes walk from my new place. A friend of mine has a nice set up in front of his wood workshop, and we even got to use his rotenburo (outdoor bathtub). It was a brilliant meeting of great people, my friends and family got to meet each other for the first time. 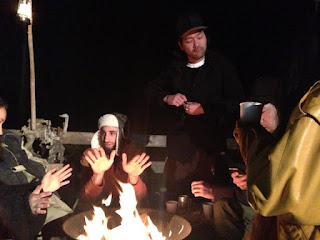 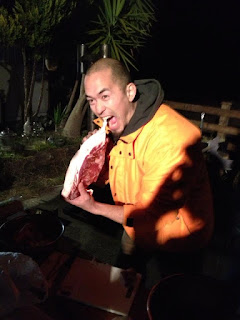 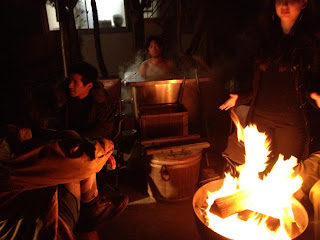 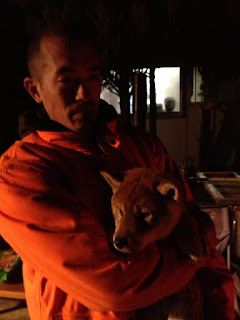 In the morning our party of 6 headed out to the mountains that I've been hunting a lot this year. My friends were interested in seeing firsthand what hunting is like, and the connection between the meat we eat every day, life, and death. I needed to get a boar! So in we went, setting up my other hunting buddy in an ambush, the boar was sleeping where expected, but I messed up a bit and Baron and boar ran to a spot where my friend had been before I radioed him to move. Baron really went after this one, so I had to leave my brother with my friends at the foot of the mountain so I could move quickly. They ended up waiting there for 2 hours!

Baron kept on this one for over a kilometer and I never caught up. My hunter buddy was moving on the other side of the ridge as well, but Baron came back after around 15 minutes. We moved to the other side to meet up with the other gun, but while on that side Baron moved over a hump in the trail 10 meters away and started baying. I tried to quietly peek over, but the boar charged and were already moving down into the gully. There was more than one there, and Baron knows better than to charge in when outnumbered. He came back up to the ridge waiting for my move. The boar had already moved off, but we went after them, slowly and quietly so as not to spook them too soon. All they knew at the moment was that a stupid dog had barked at them, and they had chased him off.

Moving down the ridge on the left, Baron kept looking down into the opposite gully. He went down halfway, and came back up. I kept hearing a peculiar sound of splashing, but thought it was the stream running below. It was strange that Baron seemed to be bothered by something down there, but a bit wary of going all the way down there. While not 100% sure, it seemed to me there might be several boar, or a very large boar somewhere down there that Baron was scared of. In these cases usually if I start moving forward, Baron gets the idea and moves ahead to engage. I turn on the GoPro, start descending, and Baron moves ahead into the gully and then up the opposite ridge. BOOM, huge charge and Baron comes flying back toward me. I can hear the herd of boar on the other ridge mumbling and moving away. I send Baron back in, and move right behind him. He goes in, bays, and the boar charge him all the down into the gully. It's the big female and her herd that I've met 3 times now, always missing her. Today is no exception, she's right behind Baron and very angry. I have a shot so take it, but miss. The herd starts to run downstream. There's a smaller boar and I have a line on him, so take that. At the second shot, the female comes back and charges Baron again. This time I have no shot, and it seems the boar have gotten away.

I radio to my friend to tell him we're onto a herd but that I missed the two shots he heard, and he begins to head in my direction. I decide to search the swamp ahead of us that the gully empties into. It's full of head high razor grass. Immediately Baron moves into the grass and starts baying, gets charged, the boar runs. I can hear it all happening, and following the sounds I can see where they will come out into a clear area. I see the boar running through the grass, Baron on his tail, and then Baron gives it a nip and it pulls up to face him. Bay and then bang. Boar's down. And NO GOPRO FOOTAGE! Battery died while I was descending into the gully haha. Perfect.

Anyway, we strung up the boar to a branch and carried it up to the top of the ridge. Then got everyone else to come help us carry it out. 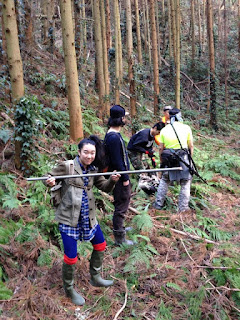 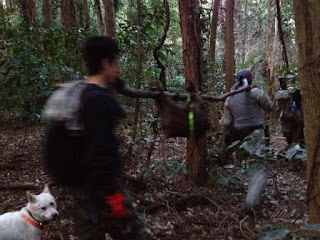