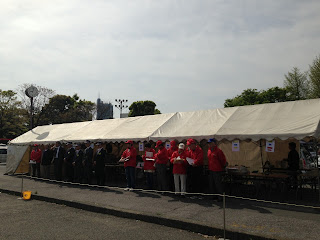 It was on April 14th, so a month ago, and I'm just getting around to posting it?! It was a warm, sunny, spring day, and I got in extra early as I was showing a Shikoku female. I showed her at the NIPPO national last year, and took 5th place was it? This female is very reactive to stimuli, so getting her to hold a stack is tough, but after a nice bit of advice from a fellow Chiba branch member (one of the old guard) on how to hold the leash properly, the difference was amazing. She was out of coat, and missing a bit of fur on the top of her muzzle from a scratch, so I was not expecting much, but come the second round in the afternoon, the judge called us into the first group, and we ended up taking 2nd place.

I learned some nifty tricks on the day, one of which was the aforementioned leash holding technique, and the other was that when showing outdoors, if there's a breeze, try to point your dog away from the direction it's blowing from. That way it blows the coat out nicely and looks fuller (especially useful if your dog is out of coat).

I ran into a lot of friends on the day as usual, and it was nice to see some of their pups and adolescent dogs. This male is from the first litter of the female in the picture below. She'll be going to the States in the future to the North American Shikoku Club. 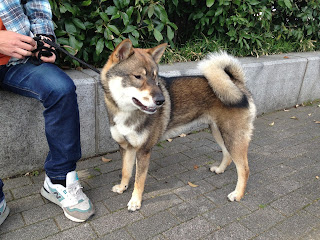 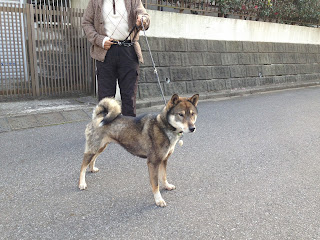 At the Tokyo regional they always have a special event for junior handlers. We've got to pass on these breeds to the next generation! 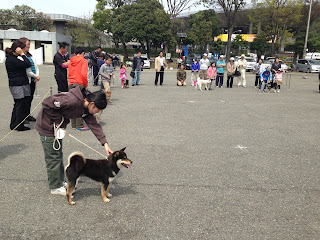 A friend's young Kai male. He's a NIPPO Kai, but the first Kai male I've seen in a long time that I've really liked. I respect the kennel that produced him quite a bit for their tireless work to breed and show under NIPPO rules. It's a pretty painful thing to try to compete in NIPPO with Kai. 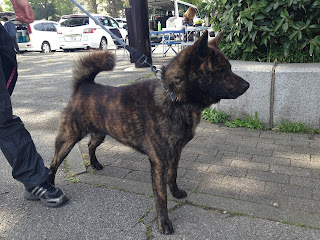 I ended the day by locking my keys in my car. It auto locks, and this is the second time I've done it. Had to call a locksmith, and they took nearly two hours to get it open. Damn Lexus and their pick proof locks.
Posted by Kato at 12:45 AM