Back in the middle of April I was invited (that's putting it mildly) to attend a boar dog tournament. Due to it being 100's of kilometers away, and the fact that I'm not into penned training, I was not that into the idea. If there's an opposite of excited, that's how I felt. 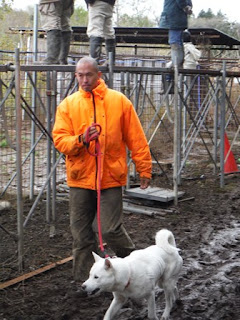 But lo and behold, there are pictures of me there, so yes, I caved. There were people there that I wanted to meet, many of the best of the best of the boar hunters of Japan. I drove all the through the night, and arrived in the morning to... snow. It was 3 degrees celcius. Near the end of April! It was sleeting and raining, thank the gods I brought my full ensemble of hunting gear. 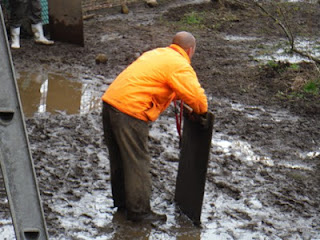 I got to see some impressive and not so impressive dogs. I had not entered Baron, but he was in the truck with me, and I ran into a gentleman who previously owned one of Baron's siblings. He was interested in seeing him in the ring, so I caved, again, and entered him. 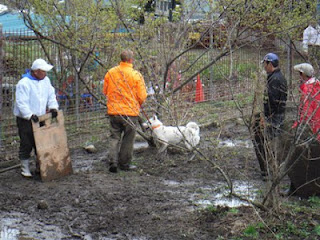 There were some seriously badass gladiatorial boar in that ring, and with everything as it was, Baron did absolutely nothing in there. Talk about being taken down a peg. Here everyone's heard about Baron and I and the boar we've been taking, and booooom. To be fair, Baron's grown a bit soft, much more careful since this last hunting season started, especially on large boar, so I wasn't expecting much. I ran him in there again on a smaller boar, and he was all over it, so I guess that's that. I did have a real soul searching regarding the ethics and necessity of tournaments like this. One of the most impressive females I saw worked the boar wonderfully, never letting up the pressure, and coaxing it out of the underbrush. When she was done, I complemented her owner. He smiled and said that he hasn't been able to take many boar with her. Something about the way she hunts is just not working, but she's great on penned boar. Some dogs were just nuts, getting tossed around by the boar, but charging back in again regardless. Those would be dead dogs in the mountains.

There were some very impressive dogs though, and these hunters really know what they're talking about. I'm an amateur compared with these giants of the mountain, so I was happy to have the opportunity to pick their brains.

One of my good friends, Okabe-san of Tenro Kennel brought his Kai male Kuma to the tournament. Of the Kai there, he was the only one that put on a good showing. Hell, he did better than Baron! We're planning to use Kuma as the base for our future boar hunting Kai program. Later on a smaller boar, Kuma went right in to catch. He's a pretty gritty Kai.