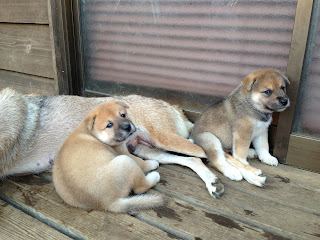 The pups are now out in the front yard during the day with mom. They were really enjoying it yesterday, all the new scents, textures, and sounds. 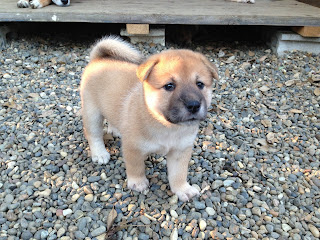 Female 1 is still looking for a home if anyone is interested. She's the calmer of the females.

Observations at 30 days: The females are more agile than the male. Female 1 is a very red sesame, female 2 (Summer) sesame, the male (Kenzo) black sesame. Summer's nose is almost completely black other than a tiny pink spot in one nostril. The pups' faces are more Kishu-like now it seems, though that may be temporary. The're eating a lot of mom's food, so I've started giving the family an extra bowl. Hime is extremely tolerant of the pups. Ordinarily she does not let anyone near things she is eating or chewing, but the pups are allowed to crawl all over her and steal from her. Baron is not so tolerant. He likes the girls and gives them a bit more leeway, but if pretty short with Kenzo.