I thought I'd written a post about this before, but since I couldn't find the link, and I'm asked about this quite often, here it is again. 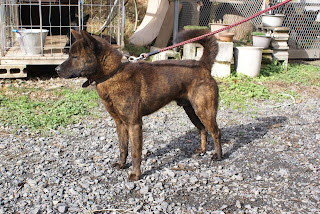 The oldest Kai Ken registry is the Kai Ken Aigokai (Kai Dog Protection Society). The breed was discovered in 1929, and the KKA was formed in 1931. The  Nihon Ken Hozonkai, or 'NIPPO', (Japan Dog Preservation Society) was formed in 1928, and for a time the KKA members joined NIPPO and showed their dogs there.

The break between the two organizations occurred when NIPPO created the breed standards for the 6 (at the time 7) Japanese dog breeds, and divided them into 3 classifications: Large, medium, and small. The Kai showed quite a range in size, with the average being in between the small and medium standards as set forth by NIPPO. This lead to the KKA members leaving NIPPO, and the controversy concerning the Kai standard began.

Today there are over 800 puppies registered with the KKA every year, around 50 registered with NIPPO every year, and just over 100 with the JKC. This makes the KKA by far the largest registry for the breed (it always has been), and thus the driving force behind the breed's direction. Size is not the only difference in the standards put forth by the KKA, NIPPO, and JKC. You  will also see differences in the amount of tongue spotting allowed, the concept of 'urajiro', ear type/size/angles, eye type etc. In NIPPO, the Kai is definitely the black sheep of the Nihon Ken, consistently finishing in the bottom of their class/group.

Now, the Japan Kennel Club (JKC) is the FCI recognized registry for Japan. The JKC gives full recognition to NIPPO pedigrees, but not KKA pedigrees. When someone imports a Kai from Japan, to register it with their local breed club they generally need an FCI recognized pedigree. In the case of a dog from Japan, they will ask for a JKC export pedigree. However, the only dogs the JKC will give these to are JKC registered Kai, or Kai with full NIPPO registrations.

This means that the vast majority of Kai cannot receive JKC export pedigrees, as they and their kennels are registered with the KKA. There are very few NIPPO Kai, so nice pups are almost never available, and JKC Kai are extremely rare as well, with most being produced by puppy mills. I've heard of many health issues in these Kai that are born to extremely small gene pools, so I tend to steer people toward sticking with KKA dogs if at all possible.

The KKA does not allow double registrations of its dogs. You can actually lose your membership if you engage in this type of activity. This is why there are no kennels that register their dogs with all three registries. Well, there was one famous kennel who did this in the past, but they had a huge row with the KKA about it, and were kicked out.

If you are interested in importing a Kai, these issues are something you need to be aware of. While I know one NIPPO kennel producing Kai that I could recommend, they do not have puppies available for export as they are working very hard to increase the number of NIPPO Kai within Japan. Unfortunately there are no JKC Kai kennels that I can recommend at this time. Some individuals overseas have successfully explained the situation with the breed to their local clubs, and gotten the clubs to accept KKA pedigrees.