My Kishu x Shikoku litter is now 2 months old. They're starting to go on short walks around the neighborhood with me, and are pretty rambunctious little pups. The females' ears starting going up a week or so ago, and it was interesting to see that all the pups seem to have picked up Baron's ears. Kenzo's ears are still soft, velvety, and flopping around. Forgive the low quality of these pictures. I've got a broken lens which is extremely dark so it's hard to manually focus, and they were taken late in the afternoon. 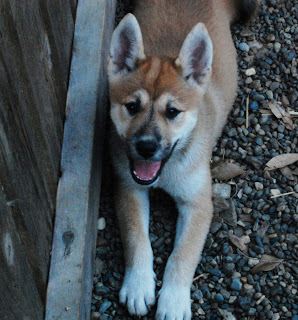 Momo is definitely the loudest of the bunch, and the girls have a new game called 'Hunt Kenzo' which seems to keep them all busy. Kenzo runs and the girls tackle and bay him till he stops, and then it's wrestlefest. 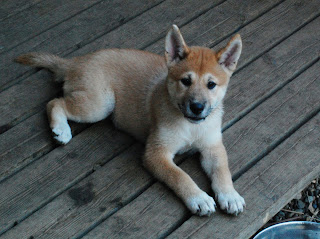 Summer is the sweetheart of the bunch, and loves to be hanging out with me. She was the larger female, but is a pickier eater than Momo, so Momo has gotten heavier. 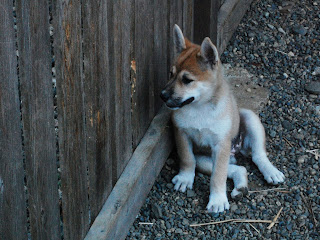 The pups had some issues with worms between their first and second round of wormer, so they'll be getting another round soon. Temperament wise these pups are like angels compared to the Hokkaido pups I've got here. They're actually some of the easiest I've had so far, but that's probably because they were born and raised here and are used to the way things go. 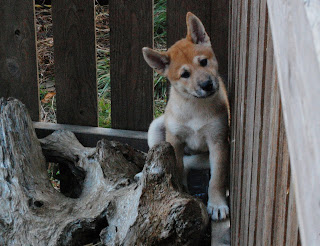 Hime's only with the pups at night now, so they are all weaned and eating well. Somebody's still got slightly loose stool, so I'm waiting for all of them to be in good shape before giving them their vaccinations. They'll ship off around 2 weeks after that I'm thinking. 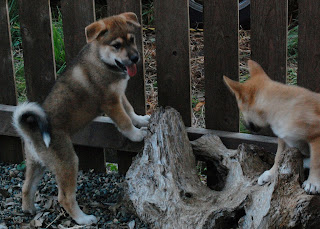 Kenzo will be on his way to San Francisco, and the two girls will probably be going to the States as well. Just waiting on final confirmation from a few people.
Posted by Kato at 6:07 PM