So the pups hit 35 days over the weekend. They're all growing well, and quickly. I'm amazed at how much they visibly change by the day.

On Sunday the NIPPO Chiba regional was held, so I took the pups and Bishome with me to show the rest of the Chiba branch members and get their input. Of course it was great for the pups to experience the car ride, and all the smells/sounds/noises/sights at the tenrankai (show).

Bishome gets carsick on even the shortest of trips, but the pups seemed to be okay. I'll try to keep it this way with lots of short fun trips in the car while they are here.

Since I was operating on 3 hours of sleep, and showing dogs, I didn't have much time or energy to run around and take pictures. The only ones I took were of this male, Korei Go. He placed 2nd in the adult male group. He's owned by a friend of mine, and was used as stud for a litter that should be born soon. 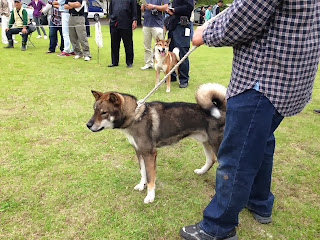 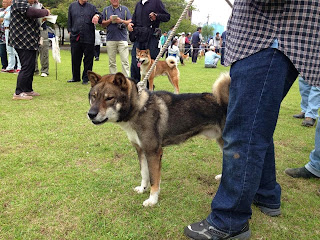 I took third place in the adolescent male category, with a black & tan male named Kokurou Go taking 1st. Chacha's sisters were in attendance of course, with Meme Go taking first place again, and Nanahime Go taking 2nd behind her.

As word spread that I had brought a litter of pups, people gathered around the truck, and soon there were around 15 of us all looking at them. I had requests from kennels for every one of the pups, but had to tell them that I already have some reservations, and that I'd be keeping the pick pup. I had a few NIPPO judges drop by to weigh in, a NIPPO board member, and the head of NIPPO HQ as well. We talked about ear size, and how the Shikoku's ears have gotten smaller and thinner, as in the old days their ears didn't go up till they were several months old. Of course this evolved into a discussion about diet and genetics, as due to the changes there, the Japanese have changed as well. We are now a larger lot, and there are many visible changes to how we mature as well. Could this have something to do with how fast puppy ears go up nowadays? Possibly.

Most everyone agreed on the female being the pick, but on the males opinion was divided. Most favored the red sesame male, but there were a few (who's opinions I value very highly) that saw something in the black sesame male. So, end result is that I will be taking the pups over to be looked at again at around 45 days old.

The good news is that seeing them all out in an unfamiliar environment, and being handled by strangers, the pups all held up very well. I thought the black sesame male seemed a little soft in temperament, but he was absolutely fine out there. There was also a couple that came to watch the tenrankai, and they were looking for a Shikoku pup. We were introduced, and they picked the little man of the litter, so he now has a home here in Chiba prefecture.

I need to take more videos with my GoPro. The quality is heaps higher than what I get with my iPhone, it just takes more work to get the gear out, get the settings going, and then to edit later. iPhone quality just doesn't really cut it.