Black & Tan in the Shikoku

I'm not quite sure how many times I've had to say this, but here I am saying it again: Black and Tan is allowed according to the NIPPO and JKC standards, and it is shown and used for breeding. It is not a fault. 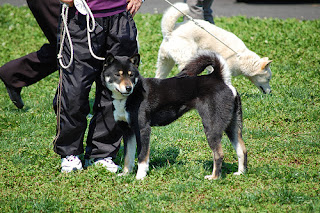 This misconception can be attributed to the fact that the coloration was left out of the FCI Shikoku standard (a quick search for 'fci shikoku standard' will let you download it in its whopping totality). Why it was left out of the FCI standard, well god only knows. I have copied and pasted the portion in question below. How fitting that it sits above the 'size' standard which incorrectly lists Shikoku females at 46cm. I mean I can understand there being errors in translation which lead to a color being left out, but how can you get a number wrong? All the medium size breeds have the same standard in NIPPO, males at 52cm, females at 49cm.

HAIR : Outer coat rather harsh and straight, undercoat soft and dense. The hair on the tail is rather long.

It can't even be said that the error was due to the JKC standard being off, because right here http://www.jkc.or.jp/modules/worlddogs/entry.php?entryID=106&categoryID=5 it has sesame, red, and black and tan, in the JKC standard (and of course the sizes are correct).

Forgive me while I catch my breath. I get worked up about this. I don't know how a worldwide governing body like the FCI can do such a horrible job at maintaining hugely important details of a breed's standard. The FCI was contacted about this, and many other errors in the standards for the Japanese breeds, but the reply I got was that the JKC needs to contact them to let them know of the errors. The JKC is too busy trying to write up proper standards for the Japanese breeds (since they have none), and told me that they would contact the FCI with the new/proper standards once they are finished with them.

I'll leave room here to say that I have no idea who translated the standard for the FCI, it could very well have been the JKC that did the botch job, and sent the data to them.

Anyway, all you have is my word that black and tan is allowed in Japan, and shown. Oh wait, you could also trust the two renowned NIPPO judges who placed a b/t adolescent male in 1st place yesterday at the NIPPO Chiba regional (over me in 3rd with a sesame male). Or you could mention to the kennel that placed 4th in the adult male category with a b/t male, that they shouldn't be showing him.

Black and tan is a difficult color to show in the Japanese breeds, as the colors and markings have to be correct, and that's not an easy thing to produce. This makes them less popular with show kennels, but many females are kept as breeding bitches since darker dogs tend to have thicker guard hairs (and some would say it produces better hues in offspring).
Posted by Kato at 9:37 PM