I went out with a couple of hunting buddies, so 3 guns, Baron, and Hime. They set ambushes on game trails, and the dogs and I went in. In 5 minutes Baron had climbed a the ridge on the left and was baying a boar on the other side in a bamboo thicket. Below was the valley I call 'jigokudani' (hell valley). It's a ravine between two ridges filled with bamboo and swamp, almost impassable for humans, and the boar sleep on either side of the ravine. I've had to go in there before to get to Baron and boar.

As I got just above Baron and the boar he had bayed up, I realized he had the low ground, which meant I was 10 meters above the sandwiched boar. I could see the bamboo shaking and snapping, but couldn't get a clear look at the boar. Mind you I'd been out duck hunting the day before with a friend (we got 2 each), and then randomly drove the 100km to Tokyo at night to attend a friend's bar's 1 year anniversary. Getting home at around 3am, and heading out to hunt in the morn is not the first thing on one's mind.

Anyway, the boar realized I was there before I could line up a shot, and he charged down at Baron. At this point I lost sight of both of them in the bamboo, and Baron began baying again 200m away. I couldn't go through the blasted valley, so I went around. Baron held the bay for the 20 minutes it took to get to him, but he gave up just before I got to him.

We pushed through the rest of the mountain till we got to the ambushers. They had heard Baron, but there was a bit of distance between them. Beyond was 'deer mountain', and Baron and Hime both headed in while we were discussing our next move. Baron got on some deer, came back, and then went after something else, and Hime was with me. At that point Hime bolted 20meters to the right, and out popped a deer. She was off after him for a while. The deer had been sleeping directly above one of my buddies' ambush spot.

Once the dogs had returned, we started to head back toward the truck, and decided to walk together. It's funner that way. A few hundred meters in, Baron moved forward with Hime in tow. Hime came back, and one of my friends started talking to her and feeding her. I told him to shut up, haha. When Baron moves off like that, there are boar nearby. Within seconds, we heard the telltale squeal of a boar caught by Baron. I flew through the 100 meters in record time, and Hime flew ahead of me to help catch. Baron had the front, Hime the back, and we had a small boar. 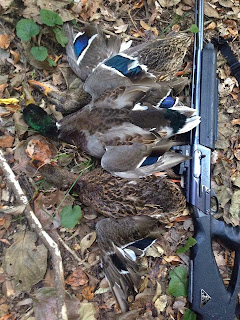 Here are the ducks. I don't have a pic of the boar since I can't seem to get it off of my friend's instagram. At this point I still hadn't fired a single shot at a boar this season. At this point.