A busy week passed before I was able to get back out into the mountains, and since it was a Sunday one of my hunting buddies from the week before wanted to come with. We started at around 11am, and we had barely walked into the ravine that we were going to start our hunt from when Baron moved 50 meters ahead and started baying a boar low on the right slope. I sent my buddy in after him, and I climbed to get above, but almost immediately the bay turned into a chase, and Hime and Baron were off after the boar.

They ran it in a circular pattern, down into a marshy area, and over the mountain road. Baron stopped there and came back, but Hime stuck near the road. I wasn't sure what was going on since Hime and I don't have the same relationship that Baron and I have. I figured it would be a good idea to go see what she was up to. Maybe she was on a boar? As I got to around 150 meters, I heard a strange barking sort of a noise. I thought maybe Hime was on a boar, so charged in her direction. At the top of the ridge looking down on the marsh I heard voices. So there were people there. As I climbed down, they called up to me, a little upset about the dogs. I saw they had a Shiba with them off leash. So that's where the strange barking came from.

Baron will leave other people and dogs alone when we're hunting, but Hime I've seen will actually start fights on occasion. The only people in Japan who can legally have their dogs off lead are hunters (and some other working dogs). Once these people saw I was a hunter, they kind of shut up. They were digging up mountain potatoes (probably poaching, as they are rare and expensive). I leashed up the dogs, and headed back into the mountain where we finally met up with my buddy.

From there we walked to deer mountain, and on a hunch he said he'd go to the 'side exit' of the mountain, and the dogs and I would roll in the front door. I was fine with this. I walk faster and quieter alone anyways. I climbed up the ridge to the top, and immediately saw a deer take off. Baron yodeled and chased for around 50 meters and came back. I was happy to see that he has learned that deer are a bore to chase... until we walked another 50 meters and ran into a small herd of them running. That set the dogs off, and they both ran for a good distance. Baron close to 1km, and Hime around 300 meters.

I've learned to just wait stuff like this out, as Baron will come back fairly quickly, though tired. I moved in the direction of the 'side exit' as the plan had been to try to wheel any prey in that direction. If I didn't get it, maybe they'd run through my buddy's ambush. As Baron got back, we walked along the side of the ridge through some pines and undergrowth. Around 200 meters from the 'side exit', suddenly 2 large boar popped up to my right. Baron was immediately after the large one, probably around 80kg, while a second boar around 50kg was a little late to the party and started running behind Baron. So boar, Baron, and boar. It was a slightly worrying sight to see them take off like that, but they were running straight for my buddy's ambush! Seconds later I heard the gunshots ring out. Baron stopped for a little bit, then started moving forward and baying.

I wasn't sure what had happened, but decided to get to Baron. I to a ridge, with only 60 meters and a ravine between us. Baron was baying, but not long enough. They began moving away. I contemplated which direction to go. It's always a tough decision to climb down. It just means you'll have to climb up the other side. It's often faster and takes less energy to go around. This time however, I remembered the week before in 'hell valley' and decided to go straight to him. As I moved down, I almost stepped on top of my buddy. He'd been down lower trying to get to Baron as well. We talked for a bit, he had gotten a boar. I asked which one, the big one or the medium sized one. He answered that it was a baby.

Apparently 3 small boar were running in front of the other two boar. My friend took out the lead piglet, missed the second, and as he fired his last shot, saw the large female last in line, with Baron behind. Since it was a small boar, I asked if he could handle it alone, which he agreed to. I told him Hime was still around somewhere, probably chewing on his boar, and I took off after Baron. The only reason I actually went after him on a long distance run was because I saw the boar were running a route directly behind lots of houses. When I say directly behind, I mean 10 meters away from people's backyards at some points. I never want there to be any trouble involving my dogs, so off I went. Of course after running through a few ridges and some gardens, I caught up to Baron who was already on his way back to me.

We walked back toward my buddy and Hime, and just as we got below them, started to climb up to the path we had been on. Halfway up, I nearly stepped on the 50kg boar. It bolted from its hiding place and off to the right. Baron came running toward the noise, saw me, and looked very confused. He heard and smelt boar, but there I was. Those boar are interesting critters. Sometimes they are extremely timid, and then sometimes they have nerves of steel. That boar had been sitting there while we talked, dragged a boar uphill, all for a good 20 minutes or so.

Anyway, we gutted the boar, put it in a stream, and headed out to try to get another. In the last waning minutes before sunset, Baron was on a boar and baying, but unfortunately time was not on our side, and Baron gave up quite quickly as well. We had one 20kg female boar for our trouble, and she was excellent eating. 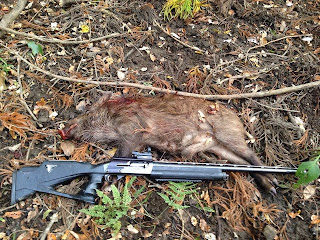