Went out with my brother, and just Baron. There's been a few situations where Hime has gotten in the way, especially on larger boar. We had a late start, as usual, getting to the mountains around 11:30.

I decided to hunt 'tower mountain' since we hadn't been in the area yet this season. Tower mountain is back beyond 'deer mountain' and it's the area deer run to when chased by the dogs. The mountain is close to a perfect circle with its base ridges surrounded by tiered fields, summer houses on the ocean side, and a marshy gully on the other.

This area is full of boar, evidenced by the numerous box traps in the area. We walked by three in the gully walking toward the ridge we would climb. 5 minutes in, Baron moved forward and to the right. He swung out to the 2nd closest ridge moving downhill, and I assumed the boar was nested up toward the bottom of the ridge, so us humans started cutting across the face of the ridge toward him. Halfway there, Baron doubled back toward us, meeting up with, and then passing us. He moved to our left around 10 meters, and out popped a medium sized boar. Baron dodged the charge, and in that moment the boar wheeled by, flying in the direction that Baron had just come back from. The boar, with Baron in pursuit, reached the bottom of the ridge, and crossed the farming road and stream.

Baron came back at that point. He's not one to cross roads too often. Moving on around the mountain, there was obviously plenty of fresh scent in the area. Another 30 minutes on, we reached a point just above the highest tiered field. There are low lying palms planted here, and the boar love sleeping in them as it's practically impossible for anyone to get in there. Baron went in, I heard the boar get up and start grunting warnings. Baron came flying out to me (he still hadn't barked at all today), and I had to encourage him back in. The boar was grunting the whole time, not willing to come out. But of course Baron is the perfect dog for this sort of engagement. He's doesn't push the boar, so they don't feel very threatened, in fact they want to drive him off.

So Baron went in after I practically walked in there with him, and the boar came after him, and practically ran into me. I was loaded this time, with two shots in the M3. The boar was coming straight at me, and I lined up the shot in that split second, but the boar wheeled to the right, and I fired one shot that missed or grazed the boar. I lined up the second, and my gun jammed with the boar passing within 3 meters of me. The boar went back in the palms, and grunted for a while. By the time Baron went back in there after him, he was running. We got on his track, and we went after him for around 600 meters before losing him. Since we were low on time, we moved back toward the truck, running into at least one boar, a runner.

200 meters above the truck, in the first ridge we didn't hunt when entering the mountain, Baron started baying for the first time that day. I moved in, getting 20 meters above him, but he was not putting nearly enough pressure on the 30kg boar that I could see playing cat and mouse with him. I just needed him to close distance a little more to hold the boar, but as it was I didn't have an angle. Baron was being extremely cautious for being on such a small boar. I had told my brother to wait on the ridge above us. As Baron moved back toward me, the boar made his get away, down the gully and into the next ridge. Baron started moving away from the boar, and tried to pass me, so I grabbed his collar and threw him back on track. Baron moved forward, but was again being very tentative, peeking around the corner, but not daring to move in.

I finally had to move ahead of him, just in time to hear him moving to the top of the ridge and moving toward my brother. At this point Baron picked up speed and went after it, wheeling around the other side of the ridge, to the gully, and started a close quarter bay. I got to within 50 meters before the boar moved off at speed with Baron in tow. They ran toward another low palm area, with Baron returning before he got there. We were out of time, so called it a day.

Meeting up with my brother, he had seen a large female with three piglets in tow moving slowly below him, and then one medium sized boar with Baron in tow. I guess that was why Baron was being so careful, he knew there were more boar around. But all in all, he had a very off day. It seemed that perhaps he wasn't feeling too well.

Ah, when Baron was on the second boar, I gave the GoPro to my brother with simple instructions on how to take video (it involves pushing two buttons). Unfortunately, he managed to screw that up, haha. He managed to take time lapse photos instead. These shots courtesy of the little brother. 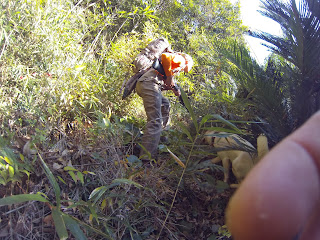 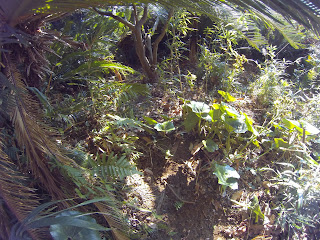 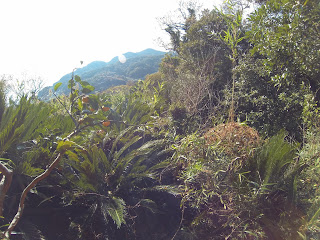 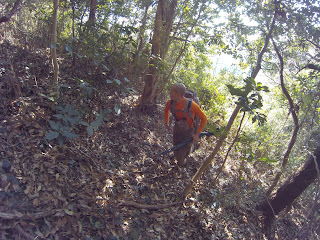 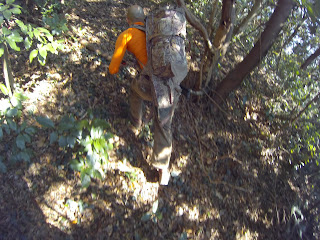 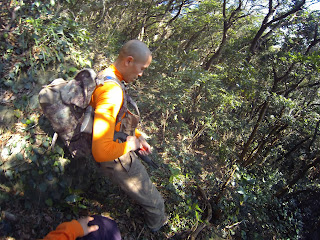 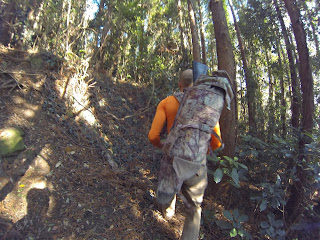 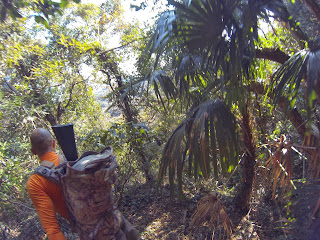 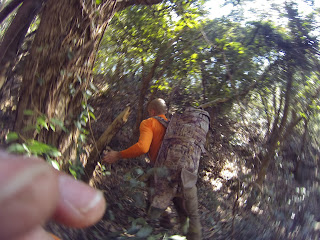 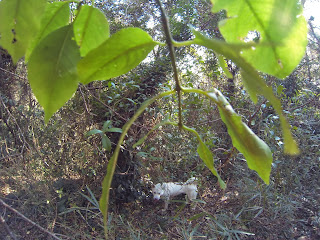