Day 6 began as a thought at around noon. I had finished up work quickly, so thought to hit the mountains for a few hours before another appointment in the evening. I quickly put together the gear, and hit the road with Baron at around 12:30. It was a beautiful day, but cool, and we got to our spot close to 13:30. I had decided to hunt tower mountain from the spot where the boar herd had run a few days before.

10 minutes in and I could see my hunch had been right. Baron was crisscrossing the entire area, picking up scents that were leading to the low palms. Immediately I heard the bay start, and keep going, and going, and going. He wasn't more than 15 meters in the palms, but it's damn dangerous to crawl in there after a boar, and I couldn't get close. He was holding it there for around 10 minutes while I tried to go in from every direction on the compass.

Finally, as if to break the stalemate, I heard Baron close, a short scuffle, and the boar flew out right at me. I popped off 1 shot that missed at around 3 meters, and then lined up the second shot as the boar flew past me, and my gun jammed. Again. I also thought I was filming, but apparently I also do not know how to push two buttons on a GoPro. The boar flew past, Baron in tow, and he went after it for a good 600 meters, stopping every now and again. It was a 40-50kg class boar.

I contemplated giving chase, but there wasn't really much point with the boar moving like that. Baron came back after around 20 minutes, and we moved on. We covered a couple hundred meters, hunting likely areas in a bit of ridge heading back toward deer mountain. At just before 15:00 I heard Baron's bark. He bayed for a bit, as I closed the 100 meters to him. As I reached peaked over the ridge, I saw a charge, and Baron backed up to come get me. This time I had remembered to push the record button (even if I did have to check to make sure).

The encounter lasted around 4 minutes. Baron comes to get me in the beginning of the video, and we go after the boar. I climb the ridge, and wait till Baron begins baying again before going over it. I move carefully to get an angle, the boar sees me, but is still figuring out what to do with the annoying white dog on the high ground, I let Baron know I'm about to shoot with my 'yoshi yoshi yoshi', and take the shot. The boar rolls, Baron holds it, and the GoPro runs out of memory.

She was a 50kg sow, with excellent meat. I hung her for a day, and then spent several hours butchering her till around 4am. It was a quick and rewarding hunting trip, even if I did have to carry/drag the boar through a marsh for 500 meters (1 hour) to get to the truck. 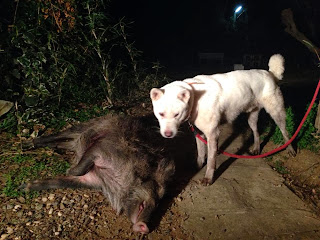