So after hunting for the morning of the 15th, I came home, walked and fed the dogs, and packed my brother's van for the 8 hour drive down to Osaka for the NIPPO national. It's just over 600km, and since I had to drive through some major metropolitan areas (Tokyo, Nagoya, Osaka) to get to the venue, as usual I left after dark.

The 16th this year was the Shiba day, and the 17th for the other Nihon Ken breeds (plus the final judging for best in show etc). I arrived in the morning, tired after a long drive sprinkled with a few naps. I had Kotofusa with me, a 4 year old red sesame Shikoku male that I would be showing in the 'seiken osu' (adult male) ring. This ring is probably the most exciting ring at the national. Kotofusa and I had been working for the past month to get to know each other, and came to Osaka on a high note after taking his sixth 'honbusho' (best in show) at the NIPPO All Kanto regional. This makes him a 'kansei ken' or finished dog. He can no longer be shown at regionals.

Kotofusa took 3rd in class as a 'waka' in his first trip to the nationals, and took 2nd the next year in the 'so ken' class. Last year he tired in the afternoon and dropped to a 5th place finish in the 'sei ken' class. Many people approached me to tell me that we would do well, that he was a dog capable of placing in the top 3 at the show. Indeed, he's a beautiful dog, but I was a novice handler showing a dog that he had only just started building a relationship with. 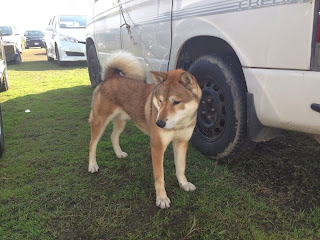 I had a great time looking at all the Shiba entrants on the 16th, as even though I'm not that fond of the breed, I'm trying to learn more about the standard. In the afternoon, I noticed other Shikoku owners arriving and setting up camp around the venue. The Shiba BOB was entry number 613, Meinan no Hana Go. Her owner's blog can be found here http://shibainu.gotohp.jp/blog/ I saw her go up against one more female, and two males for BOB, and it was quite obvious that while imperfect, she had a sparkle to her that the other dogs lacked. She stacked beautifully as well. 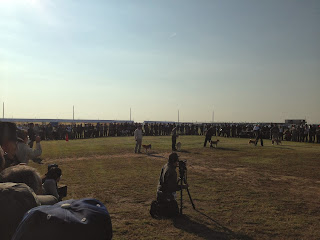 As all the Shiba left once the BOB was announced, I spent the rest of the afternoon with a group of Shikoku owners from Shikoku island. I had planned to stay at a hotel nearby, but apparently it's tradition to sleep at the venue with your dogs. Of course, that's what I ended up doing as well. We drank and ate into the night, talking dogs and history, and then slept for a few cold hours before the sun crept up. 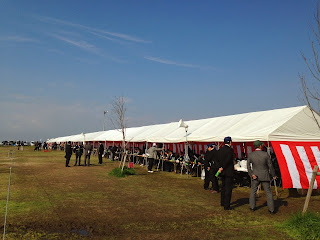 After the opening ceremony at 9am, things moved rather quickly. Koto had been walked and brushed much earlier, and from here on out it was a matter of getting into the ring at the right time for the 'kotai shinsa' or conformation judging. With 27 adult males entered, the trick is to get into the ring just a little bit before it is your turn to have your dogs teeth and testicles checked, and then to have the judge look over your dog and its movement. If you get into the ring too soon, the dog may tire before the judge gets to you. The judge for the ring was Mr.Fukutaki. 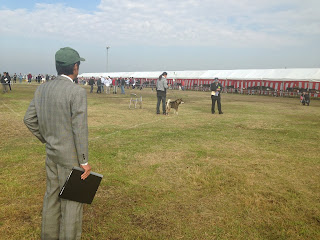 Getting Koto into the ring was not a problem, but once there he wouldn't settle. I had to move him out of the ring several times to try to walk it off, but nothing doing. Luckily I managed to get him to stack while it was our turn to be judged, but it was quite obvious that we needed to do better in the afternoon. I was given pointers by many of my friends and mentors, and was hoping for a repeat of the All Kanto show where Koto was terrible in the morning, but cranked it up in the afternoon.

Unfortunately the afternoon did not see us do much better. Koto was bouncing around for much of the time, and though I did get him to stack every time the judge was coming toward us, overall his performance as an adult male Shikoku left much to be desired. We were called to the first group, but as luck would have it we were left alone on the far end of a very large ring. By the time we were placed, we were 6th, a position we held to the end. One of Kotofusa's progeny placed 3rd in our ring, a bittersweet moment for myself and for Koto's breeder.

First place in the adult male ring went to entry number 791, Gyokuryuhou Go. He ended up losing to the adult female for BOB. As the day wound down we all gathered at the main ring to see who would take BIS. The top Shiba, Kishu, and Shikoku were gathered, and in the end Meinan no Hana, the Shiba, took top honors.

Apparently there were some good pictures taken of Koto and I in the ring, so if and when I get my hands on them I'll post them. We did the best we could, so while I was disappointed, I have no regrets. It was a terrific experience, and I look forward to the NIPPO spring shows. I wonder who I'll be showing then...