That's where things went awry. Baron was ahead of us, and quickly ran along the path to the back entrance. I was a little bit annoyed, as my assumption was that Baron picked up Tom's scent trail, and followed him. Baron was running around in the area that Tom was set up, and was not coming back, so my brother and I trudged on the planned course. After a while though, I noticed that Baron was running patterns on the other side of the mountain. We picked up pace, and headed over to him.

As we got within 100 meters, we descended into a small gully, and saw that Baron was on the ridge in front of us. I heard noise behind Baron, and as I had assumed, it was Tom. He had picked up on Baron's movement, saw him running search patterns, so had hurried to follow him. We all grouped up, and Tom said that Baron had been very tentative picking up scent from the left side of the ridge we were now on. I thought it was suspicious, so led Baron back to that side of the ridge, and moved across the face of the ridge. A few minutes later, Baron began descending the slope, into a bamboo thicket. It was only a few moments before I heard a boar get up and charge him.

Baron didn't bark at all, but I could hear him and the boar moving around, sizing each other up. There were at least two boar in there. I signaled to Tom and my brother to get in position, and that I would move downhill and ahead. I wanted to cut off any escape into the gully. Baron came thundering out of the bamboo, and now the boar were angry and grunting, preparing to chase Baron out of their territory. As Baron saw me, he wheeled back toward the bamboo, body taught, eyes wide, all business. I crept forward with him, and he moved carefully back into the bamboo. The boar took the bait and charged Baron. Out they flew to my left, a white streak, and a black streak behind it. As I raised my shotgun I saw hunter orange out of the corner of my eye and realized that Tom was in direct line of the charge. I left the shot to him, and a split second later he took it. The boar crumpled, got out half a squeal, and died. It was the quickest kill shot I have seen (other than some head shots I've had). 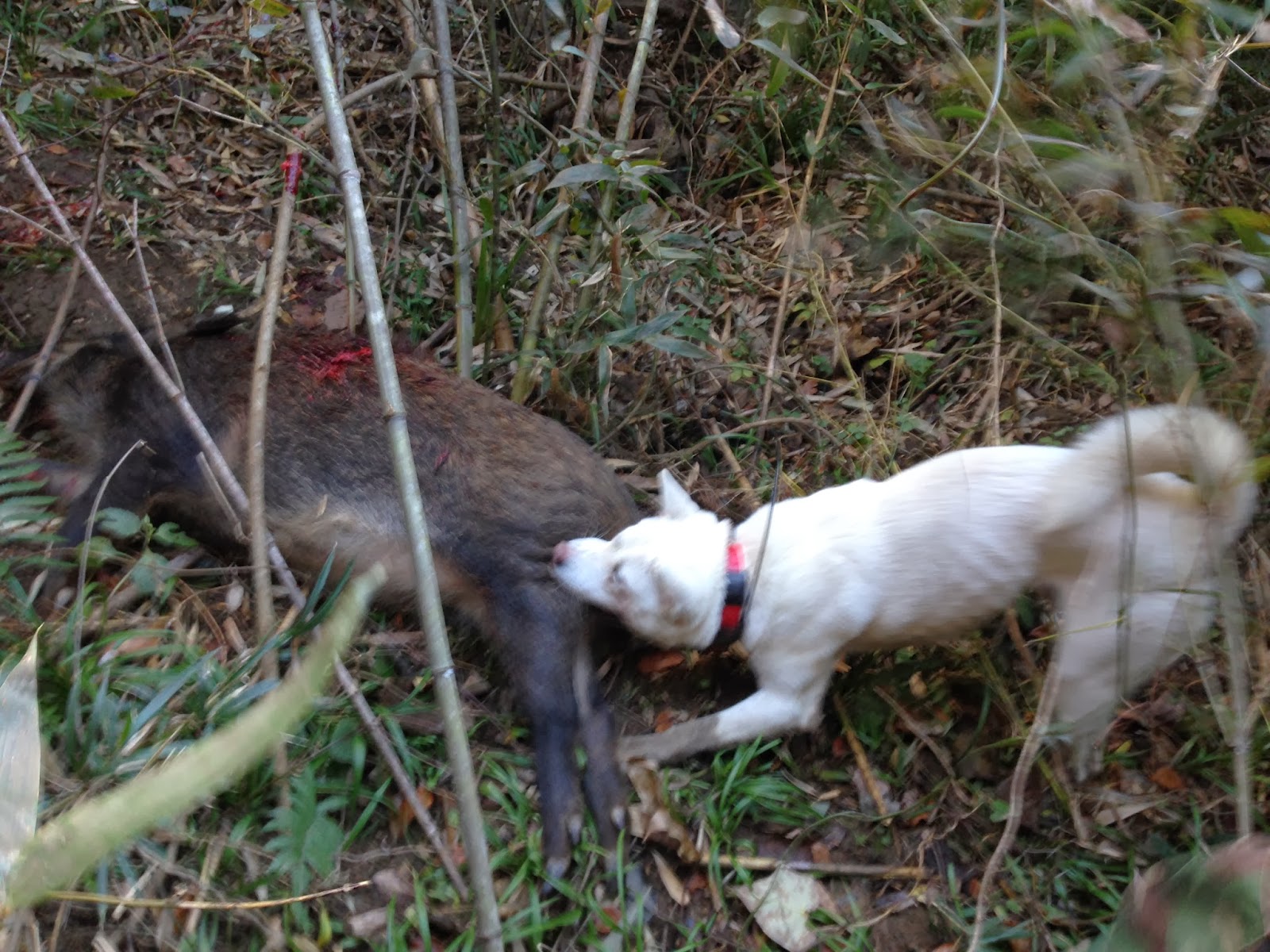 It was a 53kg virgin sow, with some excellent meat on her. I walked ahead and picked a path to carry her out on, and luckily we were able to get her to an unpaved farmer's road 100 meters below us. We gutted her, and put her in the stream to cool. Since we still had a few hours, and the car was a kilometer back on the other side of round mountain, we decided to hunt our way back.

Within minutes Baron picked up the second boar that had been in the bamboo, baying it solidly 60 meters above us. I sent Tom ahead to cut off its escape to round mountain, and I headed straight up. I closed to around 15 meters, but couldn't get a good visual. The boar charged and ran, toward round mountain. Unfortunately Tom wasn't in the position that I had hoped, and the boar slipped past. I moved forward with Baron, and getting to the path at the base of round mountain, Baron ran up and started baying again. The boar charged, and at the top of the ridge I could see its silhouette as it stopped. It was a 40-50kg class. Unfortunately, I couldn't take a shot as it was on the ridge (no backstop if I miss). I climbed, and as I did, the boar slipped through some intense thorny underbrush. Baron moved with me, but the boar opened distance. Baron chased for around 200 meters, and the returned. We headed back toward the truck, hunting along the way, but did not run into any more boar. Our quest for our first 2-boar-1-day hunt did not materialize.

Anyway, if you're going to hunt with your dog, don't send them anywhere you wouldn't go yourself. It gets dangerous, and freaky at times, but dogs get scared, and often the only way Baron will go after an aggressive boar is if he knows I'm there with the thunder. If dogs are hunting in a pack, there's more confidence all around, but personally I think that often leads to more injuries. Dogs get careless, or in each other's way, or they get too close in their over confidence. It often happens that packs will have a couple good hunts where they catch some easy boar, gain confidence, and then run into a nasty male that just slices them up.