My brother and I have a tradition of doing crazy stuff on New Year's day. It used to involve going surfing in ice cold water, but for the past few years, we party and drink on New Year's eve, and then drag our asses out of bed at some hour of the day on the 1st, and head to the mountains.

We got out there sometime past noon this year, and from the get go it was an interesting day. We hit the hiking trail side of our hunting area. It was a gusty, clear day, and Baron immediately headed toward a known boar lair. No boar here though. We moved uphill, getting to the ridge with the hiking trail, and walked it back further into the mountains. A little way in, Baron started picking up scent on the right side of the ridge, so we headed in that direction. He silently hunted the area, and I could here things moving around, but no bay.

He ran downhill and into the gully at one point, then came back and started running in circles again. Finally, he darted out just in front of me. I saw something brown and small in front of him and lined up the shot, identified it as a mountain rabbit, and let it pass. I'm not interested in turning Baron into a rabbit dog. He tore off after it, chasing it for a good few minutes. In the end it went to ground in the next ridge, as I could hear Baron baying it up.

While we were waiting for Baron, we moved back to the trail and then I heard something moving on the ridge above us to our right. I thought it was the rabbit Baron was on, but it was darker, and very round. It moved closer and closer to us, and was finally identifiable as a Tanuki or Raccoon Dog. It was a cute little bugger, so we let him pass too. Baron was baying at this point, so I figured we should honor his effort and at least go see what he was up to. This teaches him that if he barks, we'll get to him, but if it's something we don't want, we'll then leave.

Halfway to Baron, he stopped baying, and headed back toward us. Once Baron arrived, I casually mentioned to my brother that I hoped Baron would not pick up the Tanuki's scent. Unfortunately it was a second later that I saw Baron perk up, and dash ahead around 10 meters. In a matter of 2-3 seconds he had the Tanuki, shook it, and dropped it. It was not moving, and I thought that it was an awfully quick kill. Baron was wandering around it, and as we got to it, my brother said that it was still alive, but seemed to be playing dead. I've heard of this sort of behavior, but never seen it. 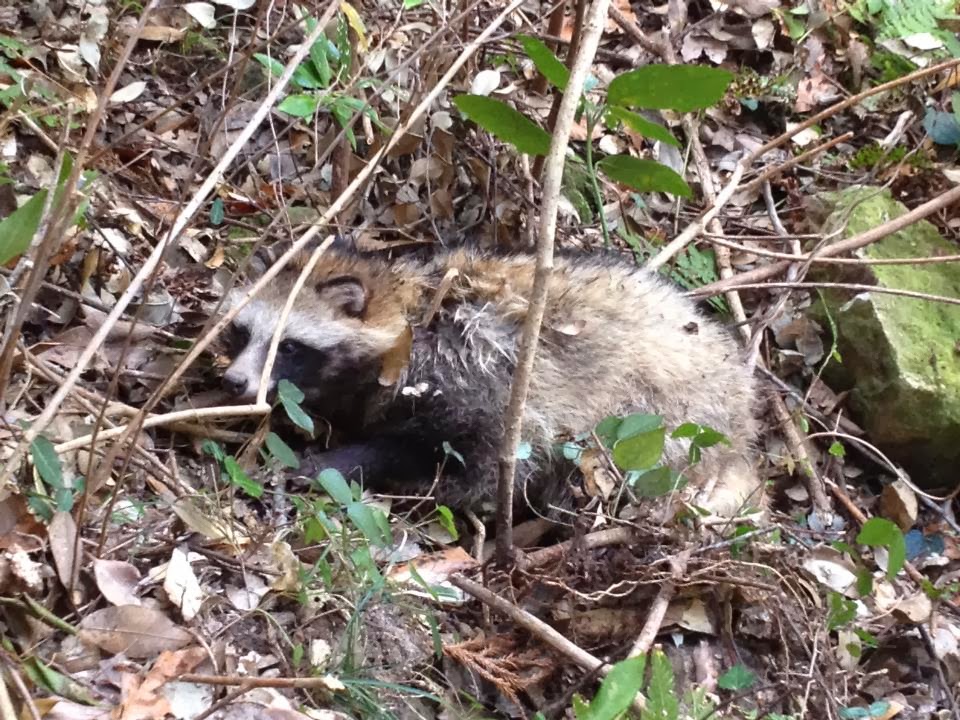 We leashed up Baron, and moved him to the top of the ridge. I then tried to make sure the Tanuki wasn't too injured or just suffering, but the damn bugger would just not move! I poked and prodded, walked around, talked, video'd, and thought about petting him a bit because he looked so damn adorable. However I had a mental picture of me petting him, and the Tanuki suddenly whipping around to go vampire on my hand.


After 5 minutes or so, I got a bigger stick and pushed him a bit. He didn't need a second invitation to move, and within moments he was barreling downhill at an astonishingly slow rate. I can run faster than that.

Since we didn't have much time this day, we needed to stop heading further back into the mountain, and think about our route back to the truck. As we reached a ridge on our right, I saw some fresh track, so directed Baron onto it. This ridge was used as a natural highway for boar moving from our ridge, and the ridge opposite. As we got down into the gully, Baron picked up scent. He moved uphill on our left, and cautiously started moving forward. I followed him, encouraging him on, till he moved up, and barked. He was in some heavy underbrush, and immediately the boar got up and started grunting his displeasure. The boar would grunt, Baron would half bark back at him, come back to me, and then go back in. I moved along the face of the ridge just below them, but the ground was slippery, and there was a huge fallen tree with millions of vines all over hampering my progress. For a few minutes I hoped the boar would come out after Baron into the clear space ahead, but since he had the high ground it seemed more likely he would just leave on the path that he used to get into his bed.

I decided to gamble and try to get over the tree without making too much noise. My heart was pounding as I tried to scramble over it, and I lost my footing, making about as much noise as it is possible to make for a 70kg human being. The boar left shortly thereafter, and Baron was not interested in going after it without me. I was not going uphill after it, since we were short on time. So, we moved into the gully and started walking through the stream. It was a good 3km back to the truck, but there was a mountain road that we'd hit halfway to civilization. We got to it, and started walking on it, above the stream. Baron picked up scent, and headed across the stream. We followed and spent the better part of 30 minutes laboriously inching after him. He was moving very slowly and quietly, and so did we. Finally we got to where a large herd had been laid up. It was the most impressive lair I've ever seen. There were several large boar in this herd. Baron moved on after them, but kept stopping around 100 meters ahead. I figured the boar were there, so climbed uphill to get above them.

Up above, we hurried along the ridge, and got to the offshoot that Baron was on. I inched downhill toward him, and I could hear a lot of movement in the area. All I wanted was a nice clear shot at one of the boar. Baron was almost at the bottom of the ridge, and then moved to my left. I knew there was a large boar directly below me somewhere but I couldn't see it. There was an outcropping below me, so I moved onto it, and realized there had been a boar directly beneath me. It was in the underbrush in an instant, the whole herd crashing downhill and across the gully into the opposite ridge covered in fallen bamboo. Baron went after them.

As I thought, he came back after 100 meters. Nothing doing against a herd like that, and I wanted to look for any stragglers. As it was, 30 seconds later I heard a boar start grunting. Baron had caught it, but it boar don't squeal until they feel they've lost the fight. I slid down the slope like I was on my snowboard, and grabbed its back leg. One thrust of the knife and the boar was down. It was a small 20kg female. My brother made his way down to us, and we hoisted the boar onto a stick to carry between us, and headed to the truck.

Once we hit the road, we dropped the small boar on the side of it, and started walking toward the truck. Around 300 meters on, I mentioned casually that it would be prudent for us to leash Baron up, just so he didn't go back into the mountain if he picked up scent. The words were no sooner out of my mouth than Baron walked into a spot off the road, with pines in back, and thin bamboo in front, and started baying. There was a herd in there, and he was baying them up very well. They were moving closer and closer to us, and we had nowhere to go. In Japan you are not allowed to shoot from a road, but the bamboo was growing right up to it, and there was no way in. Seconds later Baron came flying out, but the boar took off and uphill to our left. We tried to hurry on the road toward the truck, chuckling about how we just escaped from a sticky situation. It was practically sunset! 50 meters on, Baron ran up an almost vertical incline to a spot around 10 meters above us, and started baying. Argh!

Again, nowhere for us to go since we were on the road, and can't shoot over the road either. We had another hairy experience, as in the twilight light the boar charged, Baron flew downhill almost directly into me, but luckily the boar did not come with him. The boar stopped at the edge of the cliff. Phew! 50 meters on, this time Baron moved into the thick bamboo on the other side of the road. Apparently the herd had started crossing the road now, and we ran into them again. This time we had space to get off the road, but it was a matter of seconds before the lead boar decided she had had enough of this pesky dog and came charging straight at him. Baron flew back toward me, which meant that I had time to load one shot with the boar bearing down on me, and fire at point blank range. She was within 2 meters of me, and the shot entered behind her cheek, destroying the jugular as it moved down through the vital cavity and ended up lodged in her left leg.

It was a close thing, but she dropped immediately. So there it was, our first 2 boar day ever. We took the boars home, and the large one weighed in at 63kg. My brother had guessed it at 80, and I thought 70ish. Goes to show how hunting stories of large mythical beasts are born. 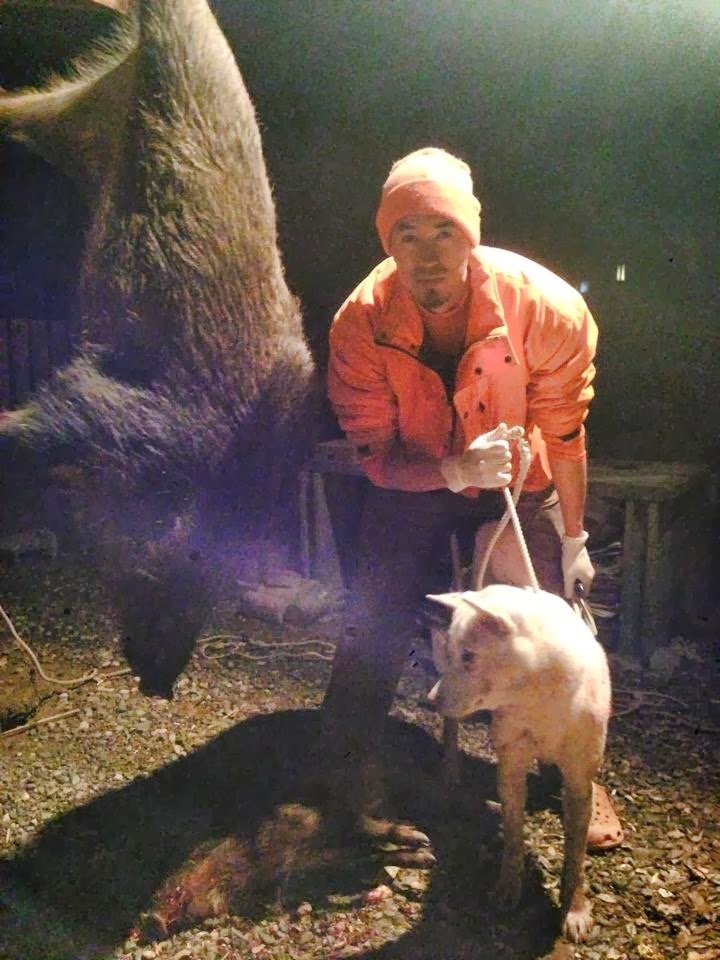 So here we sit. 7 boars on 11 outings. Baron put in solid work this afternoon, and gave us some really nice bays.
Posted by Kato at 10:29 PM