Riri was a Shikoku pup out of the latest Teruhide x Sekihoume litter. She was a beautiful pup, the pick of the litter, born at my friend (and Shikoku mentor) Iwahori-san's kennel. The litter had 2 females, and 1 male, with the 2 females being outstanding. There was talk between Iwahori-san and the NIPPO judge that bred Sekihoume, of keeping both females for show/breeding. 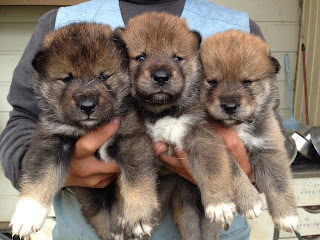 As it was, the black sesame female was placed with another NIPPO member, since Iwahori-san and I chose to keep Riri here. She was a beautiful girl, with strong eyes, great balance and structure, amazing temperament (the best I've seen in a Shikoku pup yet), she was all in all an extremely promising pup. 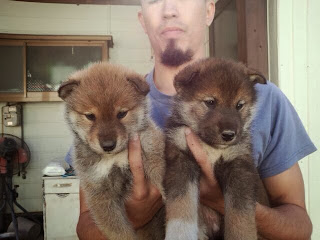 She was vaccinated immediately after arriving at my kennel (most NIPPO kennels do not vaccinate their dogs), and was settling in well, other than the fact that she was a very picky eater. She lost some weight for the first week, but then her appetite came back as she adjusted to the new menu. In temperament she was confident, so much so that another dog could get in her face, barking or growling, and she would not shy away or drop tail, nor would she growl back or posture at all. She would just ignore the provocation as if it didn't bother her. Baron was like this as a pup, and I could see the same stable temperament in Riri (she was a bit of a whiner like Baron though, haha).

On the morning of the 29th of December, around 10 days after arriving at my kennel, I walked outside to the puppy area. In the morning usually I am mobbed by the pups, but this time only the 2 Shiba came out. This is always a bad sign (it's happened once before). We had a BBQ at my house the night before, and the pups had all been fine, but over night the temps had dropped. I opened the pup's house, and this woke up Riri. She came out, but her eyes were a bit sunken and lifeless, and she seemed a bit wobbly. I immediately brought her in the house and put her in her crate. She ate her food, and slept most of the morning. I left in the afternoon to go hunting, and when I came back in the evening, she started puking as I walked in the door.

It was liquid with no food in it, but quite red with blood. Within 5 minutes we were on our way to the vet. Riri gets very carsick, so did not enjoy the ride at all, but we got to the hospital, and I held her pretty much the entire time we were there. She was weak, but could still walk around. In the morning, and now, she still had a normal temperature. A stool check showed nothing abnormal, other than that bad bacteria were out of balance in her digestive system. Since Riri had been vaccinated just over a week before, any tests for Parvo or Distemper would be skewed. Blood work showed nothing abnormal other than that her platelet count was high. The vet and I decided to keep her at the hospital overnight for observation and to get an IV into her.

The next I called the hospital, and the news was not good. In the morning she had begun having bloody stools, and was not responding well to medication or the IV at all. She was getting weaker. The vet thought she might have HGE like Hime had earlier in the year, or Parvo. The head of the hospital thought Distemper, and I was leaning toward Daffodil poisoning. There are a lot of daffodils growing around my house, and the puppy area used to be a flower bed. All the bulbs were dug up, but every once in a while a stray shoot will pop up.

Over the next few days we ran many tests and treatments on Riri, all to no effect. She was getting steadily weaker, though her symptoms eased. The vomiting and bloody stools stopped, but then she began having convulsions. After 24 hours the convulsions stopped, and all that was left for her to do now was recover. It was the 1st of January. I had been visiting her every day in the hospital. on the 30th I had been told once that I could pick her up and take her home as she was comatose and the vet was sure she would not last the night. I sped down to the hospital, and after some rubbing and talking to her, she came back around. I had been talking about Riri's condition with my friends on the Nihon Ken Forum Facebook page, and everyone was so supportive, it definitely helped with the stress I was feeling.

I saw Riri alive for the last time on the evening of the 1st. She was conscious and still looking at me, but could not move. All that was left for her now was to try to get over the hump of letting her body heal. Unfortunately she had spent all her reserves, and at 10am on the 2nd of January, my vet called to tell me that Riri had taken her final breath. I picked her up at noon, she still looked like she might wake up, and this whole bad dream would be over. But no. She was gone. I called Iwahori-san to let him know that she was gone. From the day she was hospitalized we had been talking about her condition, and we visited her together once.

I don't cry often, but when it comes to my dogs dying, it always gets me. In the parking lot, carrying Riri out, the vet and I broke down. I cried all the way home. All afternoon I tried to decide where to bury her, but with all the wild animals around digging everything up, I decided to cremate her. Dramatic, I know, but I couldn't bear the thought of her getting dug up. I built a large bonfire, and set her coffin on top. Riri is gone. It was a rough night and day, but this is life. Death is as natural as life, and we can't hold on to either. Life goes on, and I choose to look forward.

The puppy area is getting cemented, and hopefully this story will encourage more of the kennels here to vaccinate their dogs. I don't know what got Riri, and that's frustrating, but we can only do what we can. 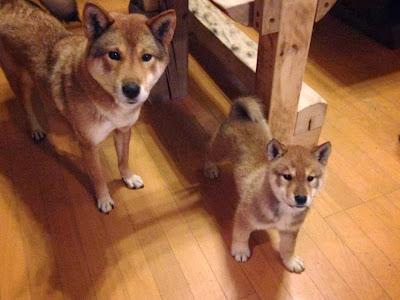