Two days later, it's a Sunday, meaning my buddy Tom is off work and wants to hunt with us. I took a call from my old friend Kondo-san on Saturday evening. He's a legendary old hunter who created his own line of hunting Kishu out of show lines. I still remember the first time I walked the mountains with him a few years ago. He walked everyone into the ground. The guy has been climbing mountains and hunting his entire life. Unfortunately father time catches up with all of us, and last year he hung up his spurs and turned in his gun. He still takes his dogs out to the mountains for exercise, and traps boar/deer.

Anyway, I mentioned to him that it was a shame that his line of dogs would disappear now that he's not breeding or hunting anymore, and we discussed possible breeding Baron with one of his females. I hadn't hunted with Kondo-san's dogs for a while, so he suggested we hunt together before the season ended. I mentioned I was hunting the next day, so he brought his dogs down, and Sunday morning there were 4 of us out there. I had Tom and my brother take Baron and work their way through on our usual course toward deer mountain, and I went with Kondo-san and his best female 'Mei' from tower mountain. As it was, we ended up all meeting in the middle as planned, around halfway through the day.

Team 1 walked their course without running into any boar, while team 2 had varied luck. I walked Kondo-san and Mei through all the usual boar lairs, and while she seemed to be picking up scent here and there, the way she moved was a far cry from what I've come to expect out of a hunting dog. She lacked confidence and drive. At one point she moved downhill, and I heard her bark once, so raced to catch up to her. She was already on her way back, and looked very bored. We moved forward. 100 meters on she was messing about downhill and to the right of us when I heard the distinct sound of boar getting up and moving about around 100 meters forward and to the left. I gestured to Kondo-san that the boar were ahead, and while Mei caught up with us, she was still completely oblivious. As I moved forward toward the boar, she followed, and at 30 meters or so the boar took off. It was a herd, and Mei saw/heard them, barking as she chased them.

She came back quickly, and I didn't have a clear shot at any of them, though I saw a lot of smaller boar. We moved forward. Another couple hundred meters later she moved uphill to the left, and barked a few times. Whatever she barked at ran, and she gave chase for 200 meters. I chased as well, seconds behind her. I followed her to the bottom of the slope, but whatever she was after was long gone, and she came back to me. I sat down for a break, splitting my rice ball and drink with her while we waited for Kondo-san to catch up. His 70 plus years have caught up with him.

Around 30 minutes later, Mei was on the right side of the ridge again when I heard movement on the left side. I heard boar moving, and motioned to Kondo-san who was behind me. They were moving downhill and in the direction we had come from. I moved back to Kondo-san, catching glimpses of a large sow with 2 in tow. I chased as quietly as possible, to the opposite ridge, thinking they may have stopped on the other side. Unfortunately they were not there. Mei came back in our direction a few minutes later, picked up the scent and moved toward the boar, but came back after a few meters.

As I glanced at my GPS, I saw that Baron was rapidly moving in my direction, downhill on the right. I raced to cut him off, and hit a bamboo wall on the right slope. I heard a herd of boar tear through the bamboo, and then Baron come through after them. I texted my brother, and found that finally Baron was on some boar. I told them he was here with me, and I attempted to get close to the boar, but nothing doing. They gave Baron the slip, and Baron ended up finding the truck, where he waited for us to get to him. We all met up at the truck, where Baron again showed what an awesome hunting Kishu he is, as he had no interest in the other dog at all, and no interest in fighting. When in the mountains, all he wants to do is get after boar.

It was 2pm at this point, and Kondo-san said it was time for him to head back. My brother took him back to his van in my truck, while Tom set up an ambush ahead of my course through the back end of deer mountain. We've never hunted this far back before, but boar and deer are always running this direction, so figured it was worth a shot. I walked in with Baron, and in 10 minutes he picked up scent. I saw him go rigid around 5 meters to my left. He was looking under a slight outcropping, so I imagined a boar was there. I nodded to him that I was ready with the gun, and he moved forward just an inch. The boar flew out at him, and then withdrew under the outcropping again. Baron dodged, and continued staring down the boar. I pushed the record button on the GoPro, and inched forward till I could see the top of the boars back. It's man was standing on end as I lined up a shot. After I fired, I could see I had missed, and the boar shook it's head in slow motion as if to shake off the noise. It wheeled downhill, and Baron was after her.

For the first time in my life, I ran full speed after a boar, and surprised myself by the fact that I was keeping up! Boar running full speed, Baron chasing, and me taking up the rear. Baron caught up to the boar, and latched onto his usual spot on the neck. The boar shook him off and ran again. As Baron caught up a second time, the boar wheeled to face him, and then chased him. Tables were reversed as Baron doubled back to me, but the boar pulled up to a stop around 5 meters in front of me, and it was still for just long enough for me to pop off a head shot. The boar dropped. It was a female, just over 50kg. This was probably one of the most rewarding hunts that I've had with Baron. If either of us had slipped up for even a split second, we would not have had this boar. But as it was, it took 10 minutes of us hunting together on this day to pull in a nice boar.

I called my brother and Tom, and they headed toward me to help lug her out. My brother got to me amazingly quickly, right after I had found my GoPro that had been knocked off as I ran after the boar. No footage of this boar. I gutted the boar in 10 minutes, and we put her in the stream to go after another. Tom moved back into his ambush position since he never reached us anyway, and my bro and I moved forward. Another 20 minutes later, and Baron was picking up scent. He moved into bamboo on our right, carefully, and I got ready to take a shot. The boar was close, but charged downhill. Baron eventually lost him going through more bamboo.

Moving forward again, Baron obviously had something picked out close by, but seemed to be paying attention to a clump of bush to our right. I moved all around it to check it out, but nothing. Baron still was looking around, and back on the top of the ridge, 2 meters from where we were standing, the boar it turned out was hiding on our left in some brush. It charged downhill, Baron followed, but wheeled back to me quickly. I assumed the boar had decided to fight, and since I couldn't head straight through the bush to it, went right to try to flank it. It didn't work out, and we lost the boar. This ended up being the end of the day. We pulled the female out in the waning light, and headed home.

Since I don't have any pictures or video today. Here's one of a light snow we got the next day. 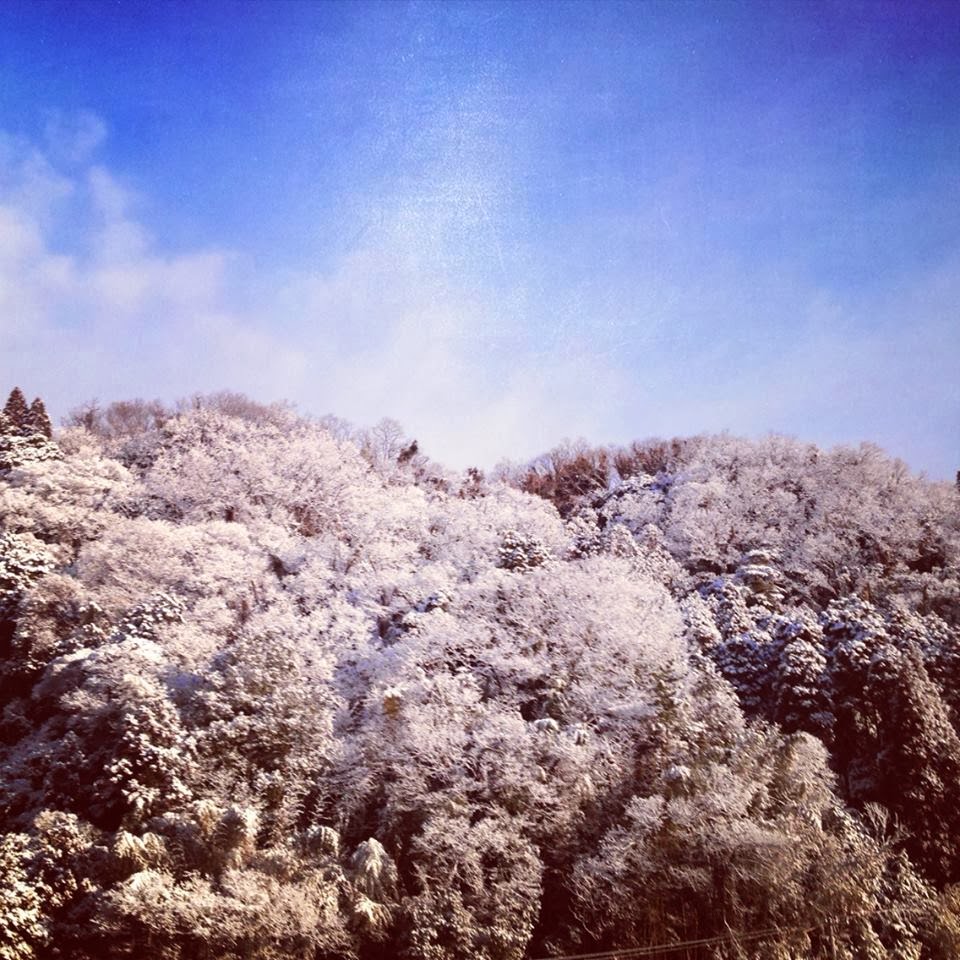