The weather was crap, but we had a few hours in the afternoon, so headed out. It was Baron, my brother, and I. Since it was a weekday, late in the afternoon, and crap weather, we hunted off the hiking trail. There were definitely no hikers on this day, haha.

Baron seemed to be picking up scent from the opposite side of the ridge we wanted to hunt. He took off for a minute or two after we had seen a lot of fresh sign on the hiking trail. It looked like a herd had come through. There is a possibility that he went after them, but decided to pass.

Anyway, since we ended up on the back side of the mountain, we hunted a long thin ridge that runs perpendicular to the ocean. There seemed to be scent around, but we didn't end up getting onto any boar. We walked all the way to the end of the ridge where it ended with a bamboo thicket and then fields/houses. Baron picked up some scent from the bamboo on the way down, but ignored it. On the way back up he went after it. Within a minute he was baying. This bamboo was nuts, really thick stuff, growing like a natural wall. I took off my pack, giving it to my brother, and began slithering toward Baron with just my gun.

A minute in, I realize Baron was not on a boar. He was going to ground. You can hear the difference in his bay, interspersed with strange growling. I got to him, and he was trying to dig under an old broken down shack. I imagine it was either a Tanuki or Badger in there. I called him off, but he kept going back, so I threw some bamboo at him, and charged him once. He finally stopped and followed me out.

We doubled back on our trail, and at one spot where earlier Baron had picked up scent but not been sure, he went downhill again. I followed him slowly and was rewarded when I saw Baron pull up rigid, pointing straight ahead. I followed his line of sight, and 10 meters in front of him saw the object of his gaze. A medium size boar was sizing him up. They stared at each other, while I lined up the head shot. As I pulled the trigger, the boar dropped. Baron charged in, dragging it downhill. Bugger that. It just makes it harder to carry when I have to bring it back up to the top! 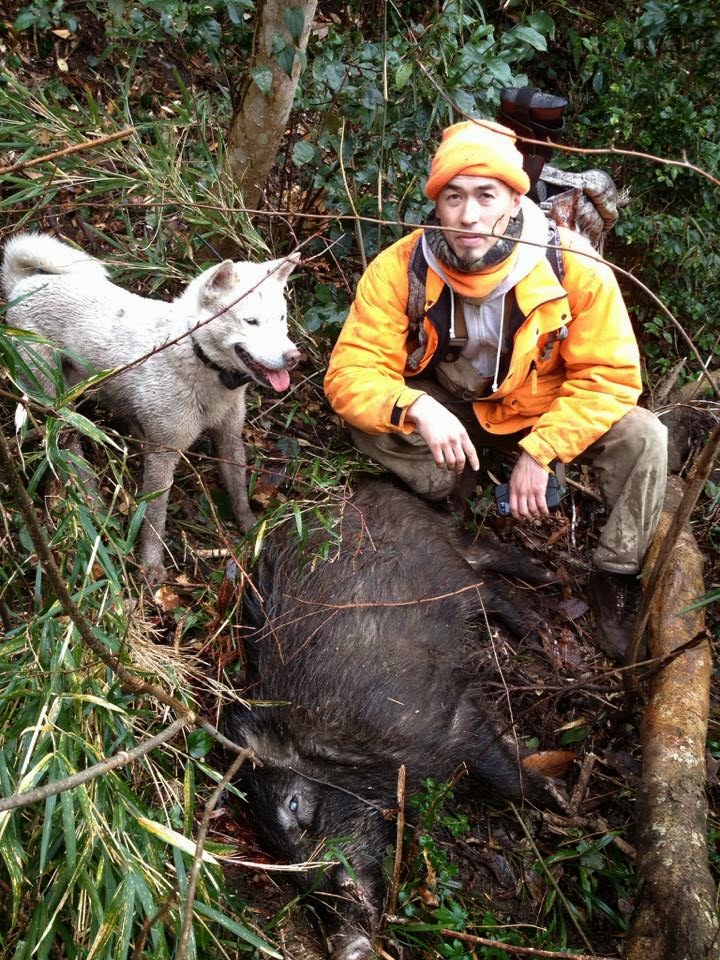 Anyway, boar 10 on 17 outings. A male boar, 54kg. We dragged him out since I forgot my rope/knife, and dropped him by a field. We then headed back through the mountain to the truck, but did not run into any more boar on the way back. The sows are just going into estrus now it seems, as this boar did not have even a lick of fat on him. The males patrol their territory following females, and do not eat during this period, which makes them extremely thin (and usually pheremonally stinky and terrible eating). Fortunately this male was still young, and while he had no fat, the meat did not have that musky stink to it.