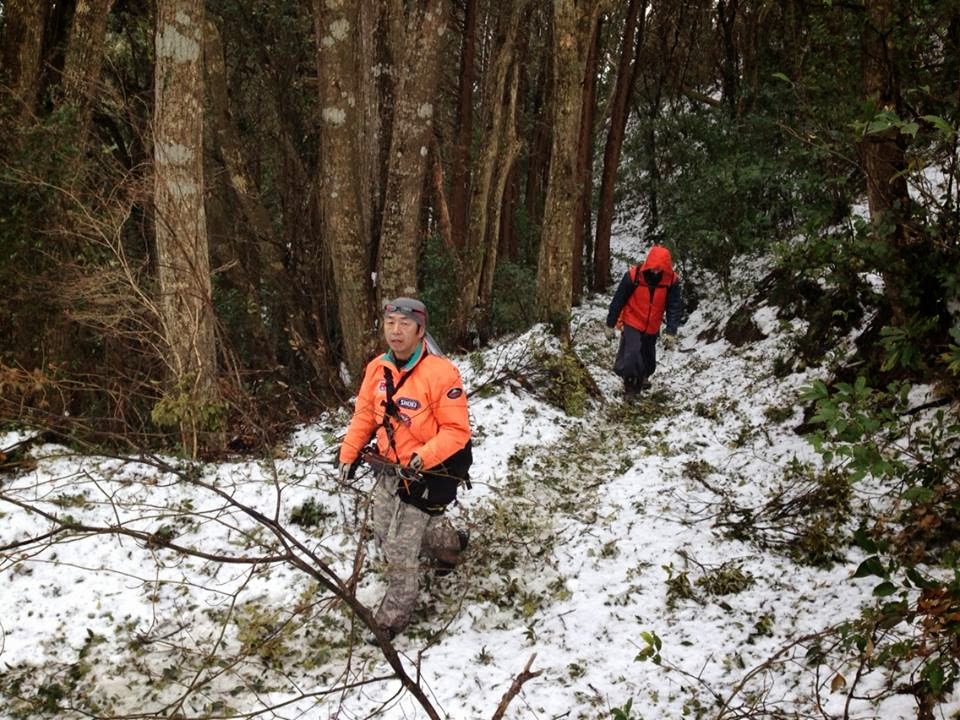 We had some snow the day before, which made me think twice about heading out, but on the low ground, all was well. The high ground, well that was another matter. Baron does not work well in snow, probably because we only hunt in it MAYBE once a year. It was also windy, cold, and very wet. If we stopped moving, Baron would start shivering. Kishu with terrible undercoats...

There were 4 of us, 2 hunters (Tom and I), and 2 tag alongs. Hunt as we might, we couldn't seem to get to where the boar were. I had miscalculated in thinking there was no snow around, and the course we took led through the highest part of the mountains here. The boar were are bedded down in the low ground in heavy cover. After realizing this about the time I took the above picture, we headed down into the valley.

Trudging on in the early afternoon, Baron started picking up scent. I moved forward with him, while Tom moved to set up an ambush in case the boar ran. I walked with Baron through a fork to the left, in the ravine. After around 10 minutes, he climbed up a steep slope on the right bank. I was on the left bank about 10 meters above the stream, and could see the entire face of the ridge opposite. There was some heavy cover, and Baron was inching around it. I could see him moving through it at times, and after a few minutes, I saw 2 boar sneaking out the back exit.

They made a bit of noise moving out, and I tracked them with the gun for a bit before giving up. No way I could get a good shot in that cover, and at that distance. Baron was still in there, and in a few seconds started baying. There was another boar in there. After around 30 seconds, the boar came barreling out. The other boar had gone further back into the ravine, away from the entrance, but this one tore off in the direction we had walked in from. Baron was around 10 meters behind it, and at one point I had a decent shot, so fired once. No good. The boar and Baron were gone, with Baron yodeling behind it.

I followed for a little bit, but figured the boar would run toward the entrance, and either run into Tom, or wheel and come back toward me. As luck would have it, a minute later I heard a bit of noise up ahead of me on the path I had just walked in on. There 3 meters in front of me, the boar froze. I lined up the shot, and pulled the trigger. Click. The shotgun had jammed after the first shot, and I had not realized it. The boar flew down into the stream below me, running toward the back of the ravine. I fired off two shots as it half flew half stumbled through the rocks below, and while it was close, after watching the video later, I saw that the timing was just off. Each shot was fired just as the boar was stumbling or changing direction.

So yeah, I have video, but it takes a good amount of time to process, which I don't have right now. Maybe I'll get around to it later. It was a small boar, maybe 20kg.

After getting out to the road, heading back toward the truck, Baron was picking up scent on the wind here and there. I picked up the track, it was another smaller boar, but it was moving on the high ground. Baron was extremely tired by this time, and not up for a chase. Further on up the logging road, Baron climbed to the right, and a little while later we heard the squeal. Baron had caught a small boar, under 20kg.