Baron's cut again. Same place, a little worse. I've got a vest for him, but it won't help for the way he's getting cut. 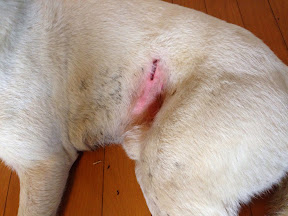 After he put in a LONG chase on one boar (1km), we moved to the other side of the valley to hunt the last couple hours of sunlight.

The boar was where I thought it would be, Baron went straight in, boat straight downhill and away. I moved forward on the ridge. If it didn't cross the road, it would double up onto the ridge and right to me. I had my answer a minute later when I heard something coming toward me.

It was a boar, probably 45kg, and he stopped around 30m away. No backstop for the shot since he was on the ridge, so I waited. He started moving again, and I had to take a strangely angled shot to make sure I had backstop, and it missed. 2 subsequent shots as he careened by on my left missed as well.

Baron came up seconds later and kept tracking it. I moved back on the ridge the direction we had come from since I saw the boar's tracks from the night before, and figured he would backtrack to escape. Sure enough, just as I was getting to the spot, he was pulling up there too, but all I saw was his shadow moving along the game trail through brush since I was seconds late.

Baron showed up a few seconds later, and moved into the low palms on the opposite side of the ridge. Boar moved out with Baron in tow. I ran all the way to the last spot I thought the boar would run to to get out of the mountain, and sure enough they were headed right toward me.

Unfortunately Baon peeled away and backtracked, and I wasn't sure what to make of that. He wheeled back around, and I decided to head downhill into the gulley where I figured it would all end. Halfway down Baron started a really good bay, and I ran to help. He was up on the high ground on the other side of the gulley around 280m away. I closed to 150m before it was over, and they were moving again.

Baron came back around, and it was the last minutes before sunset so I called him off and we headed to the car. He was walking/running fine, and loaded up into the front seat as usual. When we got home and he moved to get out of the car, I noticed a little blood on the seat. I hoped it was just a scratch somewhere, but no. Baron's been tagged in the exact same place as last time.

It hurts a lot more this time. It's the next morning and he's moving very gingerly. Just trying to keep the antibiotics up and keep him comfortable. Vet and I have decided not to stitch just yet, since he will just take them out anyway, and we're going to let it drain a bit first.

Now I know that Baron getting cut last time was not a fluke. I'm having to reconsider how we hunt and hunting with Baron in general. I definitely don't want to lose this guy. I grabbed a pack of cigarettes last night and a couple of beers and sat down with Baron and had a good thought about it. I was a bit depressed but we'll think about this some more and figure it out.