So the show season for the spring has drawn to a close. Last week was the all Kanto regional, and it was held here in Chiba with 253 dogs entered.

I entered Mei (Kotomi Go), but ended up showing Kuromasa as well. He's out of coat, and has a bad habit of wagging his tail in the ring which is a big no-no for NIPPO. It's what he's famous for... the strong sickle tail that starts to sway. 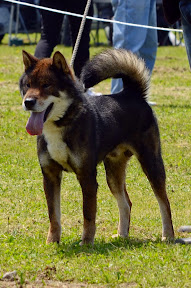 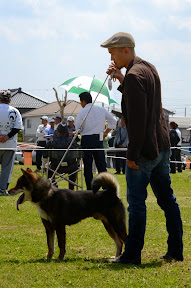 Anyway, we were just showing him so that everyone in the area who has not seen him yet could get a chance. We retired after the morning round.

There was a bit of drama in the morning as while I was walking Kotomi after arriving, a Kishu escaped and came running toward us. She came up and was sniffing us, and around 5 people took the chance to surround her and grab her. The sudden grabbing and the Kishu freaking out really bothered Mei, and she dropped tail for quite a while. I took her back to the car and into her crate to calm down, hoping that she wouldn't be scarred by the experience. With Shikoku often all it takes is one negative experience like this to ruin them for life... 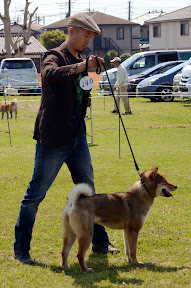 She was definitely bothered when we got in the ring, and almost dropped tail when the Kishu next to us moved toward us. I moved us away from the other dogs, and luckily she held up alright, though it was hard to get her in a strong stack. I stood between her and the sun to try and keep a shadow over her as it was a pretty damn hot day, and she seems to heat up pretty quickly. Overall we did fairly well, ending up third in class again, but in a pretty strong waka2 class it was a good end to the spring season. 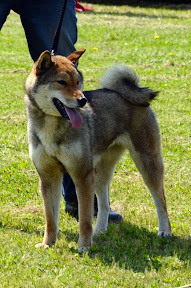 My thanks as always to the Yajima's for the pictures.