So we do this once a year, it's a study group organized by the NIPPO Chiba branch. We invite a judge, and anyone who wants to, brings their dogs. In the morning dogs are brought out one at a time, and the judge critiques. The owner can ask questions/opinions, as can everyone else gathered. It's a really useful situation as we can bring out new dogs before they are shown the next season, or just show everyone dogs with certain good/bad traits that we wouldn't usually show (which means no one would ever see them). 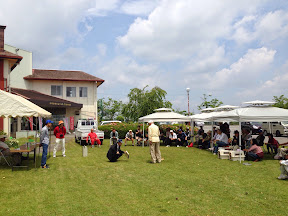 We all have lunch together, and in the afternoon the judge gives a seminar with a question and answer period regarding the standard, handling, new rules or directions in NIPPO.

Anyway, I figure I'd share something from the other day. What do you think about the color of this black/tan Shiba male?

I've seen a lot of very poorly marked b/t overseas, and I think it's due to lack of knowledge regarding what to look for when breeding them. You have to keep correcting color/markings every generation, and it's actually rather difficult. This male for instance, he's the first step in a direction you don't want to go (though he's a nice male). His coat is too black, and you see that he doesn't have enough white coming up on his tail. This is the start of too much black spreading, and something that will need to be corrected in the next generation. I see a lot of b/t in Europe especially that have too much red, and almost no urajiro/white. In all areas there should be 3 colors (even the eye spots), black-red-white.

Here's how the white on the tail should look. 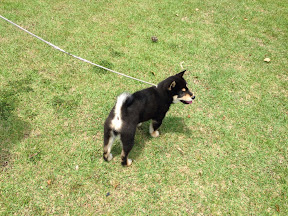 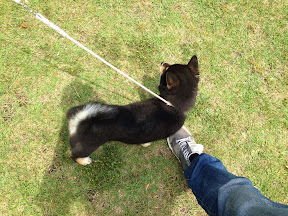