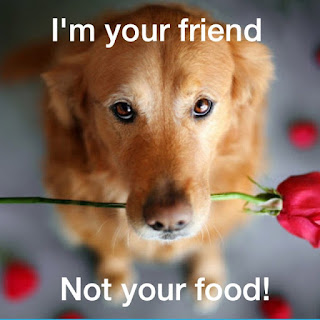 
There's a lot of outrage on social media now regarding the dog eating festival in China. Where do I stand on the issue? I'm against stealing dogs. I'm against being unnecessarily cruel to living creatures. It's the same argument I have toward the whaling in Taiji. I don't want to cause unnecessary pain or stress to any animal or person.


What I want to point out here is that this picture and caption I pulled off my Facebook feed is lumping together two completely different issues: animal cruelty, and eating dogs.


Am I against eating dogs? No.

And I may as well add whales and dolphins here too.


Am I interested in eating dogs? No. I'm not really into eating land predators.

Do I want to eat marine mammals? Not really due to the high mercury build up, and the depletion of marine animals due to commercial fishing (which is why I don't buy fish at the market, and don't usually order it when I'm out either).


I think an emotional argument like, 'I'm your friend, not your food!' is ridiculous. If you're a vegetarian, I respect that, and I immediately shut up because you do not believe in killing animals for food, and I do. But if you eat meat, don't you think it's a little strange that we label animals as food/non-food solely based on our emotional attachment to them? Pigs are extremely intelligent animals, yet we have no problem with someone stuffing them into tiny sensory depriving pens for their entire lives so that we can have a nice sausage or delicious morning bacon. But dogs? No! They're our friends! Horses? No! They're for riding! Cows? Yes. What??? When did we decide that it's okay to eat one herbivore, but not the other?


The wife of a client of mine who lives off of factory farmed meat, hates the fact that I'm a hunter. Her argument was that the animals she eats are raised for food, but the ones I eat are free and should be left wild. My reply was that the animals she eats are in captivity their entire lives, often in deplorable conditions, and most likely undergoing a very traumatic and stressful death at the slaughter house. She has no idea how they have been treated, who has been raising them, what they have been eating etc etc. The animals I hunt have been free their entire lives, and are stressed/suffer for the last few minutes of their lives. They have a chance to escape, and if they're smart and strong they often will. They're eating what is naturally available, and it's a sustainable way to put meat on the table.


Please, let's be emotional about issues we care about, but not get so carried away by them that we are not making sense anymore. I'm all for protesting the ridiculous issues surrounding this festival. Seriously, the stealing dogs and barbaric way they slaughter them (like the fur farming in China) is ridiculous, but have a think about whether you're against the pain and suffering, or against eating dogs as well. If you're against eating them, have a think about why. If you come up with a good argument against it, feel free to tell me about it, as I'm always happy to be enlightened, and am willing to change my opinions based on new ideas.