I'm present at a lot of dog matings, matings at my kennel, helping at friends' kennels, transporting dogs to other kennels for mating etc. I've even been there for a few at overseas kennels. 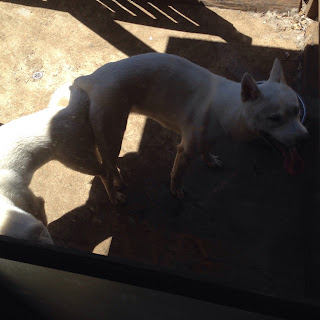 My short opinion on the matter: let's do it naturally.

It should be the norm, but more often than not, it's not. There's restraints (like guillotines), muzzles, holding females that refuse to be bred, guiding males in etc.

There's multiple reasons that I feel it's important to maintain a natural ability to mate.

1. Sound temperament. It requires a sound temperament in both male and female, willingness to mate, drive to mate. You can't have dogs that want to kill each other, dogs that refuse to be bred, or males without the drive to get females in the mood (Baron's great at this) and without enough drive and stamina to keep at it till there's a tie.

2. Sound structure and breeding. I've seen Akita that were too heavy to hold their weight or their partner's weight, or not structurally sound enough to hold up to the weight and movement of mating. I've also noticed that it's quite difficult to breed dogs with weak rears as in females it causes them to drop down toward a squat when the male climbs on, and in males it's hard for them to keep balance while thrusting. You also need a dog with enough stamina, that's not going to tire after a few thrusts.
And of course all the bits and pieces need to match up well.

3. Maintaining natural instincts. This includes the drive to mate, the ability in females to choose their partners (for many reasons unknown to us), and males and females knowing when to mate.

I'm sure there are more reasons, but for starters those are my important three. I've only had one female here at my kennel that would not breed (she was dog aggressive) even though she'd been acclimated to playing with males before her heat. The rest I've luckily been able to breed naturally, with failed matings happening on occasion when visiting other kennels for the first time.

Watch me eat my words when I try to breed my Shikoku females this season haha.
Posted by Kato at 2:02 PM