Entered Mei (Kotomi Go Yamabiko) in the Saitama branch show. It takes a lot of work to get a dog ready, and a lot of breeding beforehand. Then on the day you make sure you get there in time, and then there's the whole process of easing the dog into a comfortable place before and after it gets into the ring. Most Shikoku get carsick, so that's another layer of conditioning you have to deal with (and clean up). Some dogs are high energy, some low energy, and you have to adjust your process. 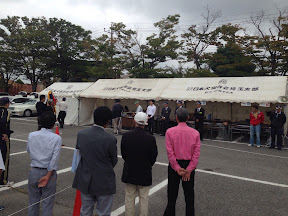 Here we are in the ring, in a typical NIPPO stance with the dog out front, and the lead at approximately 45 degrees. Mei was terribly out of coat, but it's a lot funner to show a dog than just hang around a show, and it's great practice for me as a handler. Thanks to the Yajima's as always for the picture of Mei and I. Here's their blog http://kishu-ken.blog.jp/ 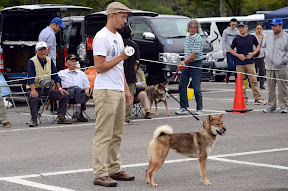 We were happy to get 2nd place in class. Mei is a nice dog, and more than anyone I know what her faults are. She's got great ring manners and temperament, and just great temperament in general which I really like about her. Here she is from this spring when she was almost in coat. 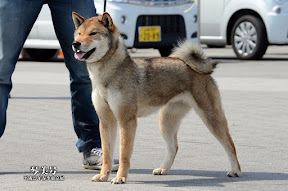 Here's a short video from the female wakainu 1 group. There were a lot of nice dogs in this group, with first place going to a friend's Kishu female, Sara. She's over on the far right in the video. That's three first places in a row for her now.

Shows are definitely not the end all for me, which is probably why I'm not that excited about the results. It's a place to see everyone, see the new dogs coming up, and then a fun game to battle the environment and your opponents. There are so many intricacies in dog behavior, and human behavior, that you get to see at shows. It's looking more like I wont have a dog to show at the national, but I guess we'll deal with that bridge when we get to it. It would make the long trip easier to travel without any dogs haha.
Posted by Kato at 6:12 PM