I use a wood stove to heat the cabin. I could buy a solid cast iron stove for 100,000 yen (maybe I'll make one at some point), but I use a flimsy thin burner known in Japan as a daruma stove. It only lasts a few years, but costs around 5000 yen. Theoretically I could keep burning through them for 20 years and I would finally have paid as much as I would have for a cast iron behemoth.

Anyway, I've used my current stove for 2 years, and rather than burning through, the top actually rusted out since I left a tea kettle on it constantly. So, since autumn's settling in it was time to clean the chimney and switch in a new stove. 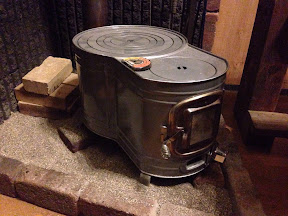 What do we do with the old one? Recycle it into the coolest fern pot. 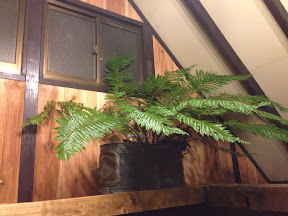 Don't throw it out, recycle lalalala