Are there any photo examples of a really fit physique? Would you consider dogs with more muscle definition as more "fit"?
I've seen some dogs that seem too thick in build, but I wonder if it's more so their coat, or, overall diet/exercise/genetics?

For starters, one thing I wanted to put in my last post but forgot about was to say that in 'Western' terms, the Nihon Ken is supposed to be a 'dry' dog. I think that's the term for it. Well, the Nihon Ken other than the Akita, since the large breeds should have more bulk and presence.
To get back to the questions though, yes, muscle definition. I'll start off with a picture of Baron toward the beginning of the hunting season. He's still carrying a fair bit of mass, but the build is there. You can see a good abdominal tuck, his ribs in the front, and good muscle mass in the shoulders (can't really see his chest at this angle). Another thing is take a look at the back legs at those tendons. On a dog that is not really being exercised, you may have the same proportions and weight, but there's a heaviness and overall softness to the dog. I'm not saying all my dogs are fit, they definitely aren't, but this picture of Baron was a decent example so I'm putting it up. 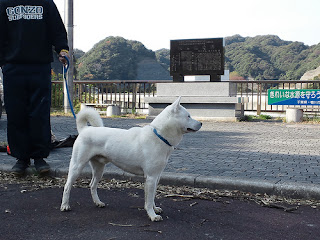 The next dog is Ibuhime Go, best of breed at the NIPPO Grand National some years ago. I love this dog. Everything about her screams strength, and that's my interpretation of the Nihon Ken standard. Strength from the tip of nose to the tip of the tail. I'm talking everything here, good strong pigmentation, a strong standing coat (Ibuhime's is a little short here I think), good strong angles that give the dog strength. I could go on and on, but think about it, strength, but balanced. Nothing showy or over the top, just a quiet strong strength. 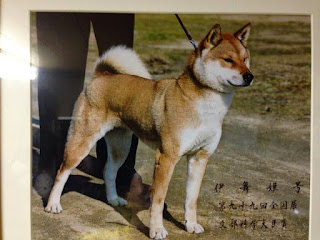 The next dog is Orin (Tsubomi Go). She's bicycle exercised every day, and it shows. 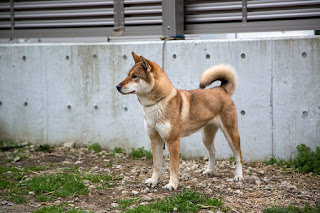 Yoshishizuha Go. He's not in his best form here, but I only have a few minutes before heading out to Tokyo, and this selection of pictures are just the ones I came to first. He is a Kotofusa son. I'd like a bit more in the shoulder here, but you can see the dryness and the tight body that a Shikoku should have. Of course some dogs are thinner than others, some heavier boned, some with shorter coats, some thicker. In this again, the thing to look and select for is strength, but in balance. You don't want to keep pushing toward dogs with more and more bone, or less for that matter. You do the best to get the dog you have in the best possible condition. 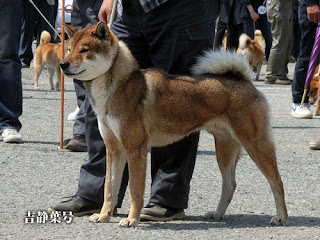 This is the Kishu I used in my last post. I don't remember when I took this picture, but the dog was fit, so in the post it went. 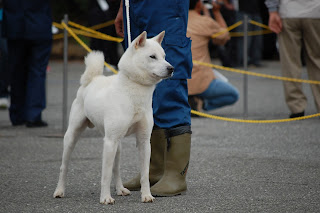 Coat, diet, exercise, genetics, all these things do play a role in how a dog 'looks'. What I'm saying here is that we should be aware of what is correct, what we should be looking for, so that we know what we're breeding for. I've had dogs from some lines that eat anything and everything, dogs that fatten very quickly, and I've had to be very careful to control their meals and exercise. Then there are dogs that are very picky eaters, and it's a struggle to keep weight on them. They're just like people in that regard.

There's some variance in the breeds too of course, with the Kishu generally being a bit heavier than the Shikoku, and then in lines in the breeds too. The Hata line of Shikoku was generally a heavier dog with a thicker coat than the Hongawa, so there's allowances for variance. There's also sexual dimorphism. Dogs should be larger and more built than bitches. The important thing though is that a fit dog is a fit dog. It doesn't matter its breed or build, I can appreciate a fit dog and the process that went into building that physique. And that is the condition dogs in the ring should be in.

On that note, I've got to head out to pick up 6 puppies. I'll be babysitting 5 Shikoku and 1 Hokkaido for a while. This is going to get messy. My 3 Shikoku pups are at around 2.5kg now, just over a month old. Puppy fucking city. Goodbye to sleep, hello clean up duty.