One Step Forward, One Step Backward

Breeding dogs is not easy. I take that back. Breeding good dogs is not easy. Every breeder has their own goals and ethical standards, guidelines for their plan. I don't think it's possible to truly appreciate a well bred dog until you've tried breeding yourself.

Anyway, getting to the reason for my zen paragraph, I present to you my latest Shikoku hip slides. The first is Rin, one of my hunting line Shikoku. She's around 18 months old now. She's a nice red female, very nice structure and movement, quite bold, and extremely high energy. The problems I have with her and her sister (who I placed nearby to cut down on dog numbers) are these: size, and temperament. Shikoku females should be 49cm, with a tolerance of +/- 3cm. Ran is around 44.5cm, and Rin around 43. They were tiny from the day I picked them up from the truck depot. The other issue, and a bit of a kicker, is temperament. Their very high strung, which bleeds into them being very reactive. They're fine with my dogs, they've grown up with them, but anything else that moves is generally met with a whirlwind of Shikoku attitude. That's putting it nicely. Basically their switch just goes on, and they sprint toward and engage all threats. I can't hunt safely with that, so they don't get any off leash time. I had originally hoped to hunt them as a pair, and then breed them in the future. I've kept Rin, the smaller female, because she has the better temperament and conformation. I will most likely breed her once and keep a female, aiming to pick one with some size. Rin's hips look pretty good. 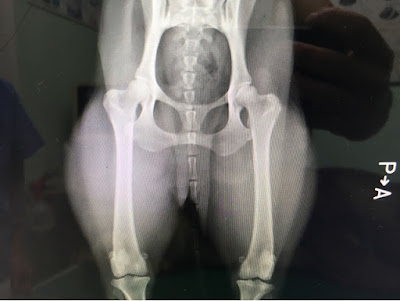 The next hips are Mumu's. Mumu has a fantastic temperament, amazing harsh coat (best I've seen in the breed so far), some pretty nice type, great bones. Her drawbacks are a narrow front, and I noticed a wonky back end. We were really hoping to get some pups out of her, but I was quite disappointed in these hips. 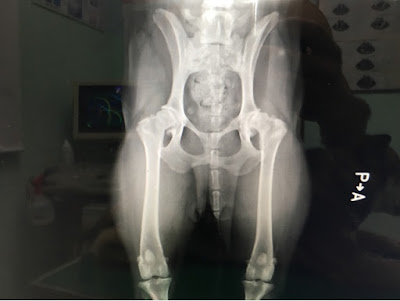 I'll see a lot of breeders 'have a bad day' or get really depressed about losing a good dog, or about unfortunate things that happen to their 'program'. Really though, this is nature, this is the way it goes. Your welcome to get down, but me, I'd prefer to accept and move forward. Way too much going on to have a bad day about a little curveball. Have a nice day everyone!
Posted by Kato at 10:23 PM