Sounds like I'm beating an ever dying drum here, but by the numbers the Kishu decline is now worse than the Shikoku's. The numbers were there in my last post about the Hokkaido, but I thought I'd put them here too just so everyone's aware.

So we've basically lost 50 percent of Kishu registrations in 6 years. In comparison, the Shikoku we've managed to keep the decline to a more manageable number, and I think there's a lot of awareness about the low numbers. 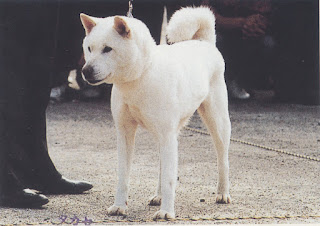 We're basically seeing extremely dangerous decline in registration numbers for all the medium size Japanese breeds other than the Kai. I'm thinking I'm going to turn my new Awa Yamainu blog into a mostly Japanese blog and see if I can bang up some interest here in Japan.

I'm thinking I'll breed Baron's daughter Karen on her next heat to do my part.
Posted by Kato at 3:35 PM