I'm no geneticist, and definitely not into the genes involving coat color (lack of interest!), but since I quite often have people misidentifying Shikoku coat color, here is a picture of the difference between black sesame and black and tan. 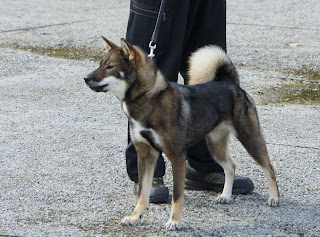 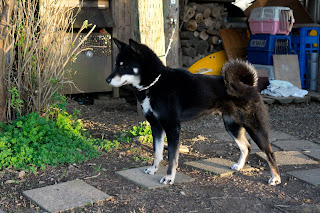 Now that I sit here trying to figure out how to explain the differences, I understand that it's not as easy as I thought. All Nihon Ken are supposed to have 'urajiro' which is white or lighter areas on the ventral (underside) portions of the body. And even a black and tan Shikoku should have 'red' (or tan if you want to describe it that way) markings. You can see how the markings are similar on the legs, black fades to red, fades to white. I guess the easiest thing to do is explain what 'sesame' is in the breed. It is black tipped hairs. If you pluck one, you should see that a single hair is white at the bottom, then red, and black tipped. In a black and tan Shikoku, you generally have a solid black hair. That's probably over simplifying the complex genes involved in perfect markings for a Nihon Ken standard coat, so just look at the pictures. Up top is a black sesame Shikoku, and below it is a black and tan.
Posted by Kato at 6:43 PM